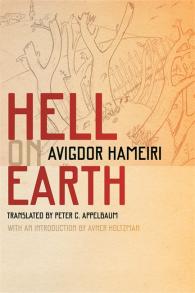 Avigdor Hameiri
Translated by Peter C. Appelbaum
With an Introduction by Avner Holtzman

Hell on Earth is the second book written by Avigdor Hameiri (born Feuerstein; 1890–1970) about his experiences as a Russian prisoner of war during the second half of World War I. Translator Peter C. Appelbaum first became interested in Hameiri’s story after learning that one quarter of the Austro-Hungarian army was captured and imprisoned, and that the horrific events that took place at this time throughout Russia and central Asia are rarely discussed in scholarly texts. Available for the first time to an English-speaking audience, this reality-driven novel is comparable to classics like All Quiet on the Western Front and The Gulag Archipelago.

The text is deeply tragic, while allowing some humor to shine through in the darkest hour. The reader is introduced to a procession of complex characters with whom Hamieri comes into contact during his imprisonment. The narrator watches his friends die one by one until he is released in 1917 with the help of Russian Zionist colleagues. He then immigrates to Israel in 1921. Hameiri’s perspective on the things surrounding him—the Austro-Hungarian Army, the Russian people and countryside, the geography of Siberia, the nascent Zionist movement, the Russian Revolution and its immediate aftermath—offers a distinct personal view of a moment in time that is often overshadowed by the horrors of the Holocaust. In his preface, Appelbaum argues that World War I was the original sin of the twentieth century—without it, the unthinkable acts of World War II would not have come to fruition.

With an introduction by Avner Holtzman, Hell on Earth is a fascinating, albeit gruesome, account of life in prison camps at the end of the First World War. Fans of historical fiction and war memoirs will appreciate the historic value in this piece of literature.

Peter C. Appelbaum is professor emeritus of pathology at Pennsylvania State University College of Medicine. After more than four decades in infectious disease research, Appelbaum is spending his retirement years writing and translating books on modern-day Jewish military history. He is the author of Loyalty Betrayed and Loyal Sons and, together with James Scott, has translated a bilingual anthology of war essays and poems by Kurt Tucholsky. Broken Carousel, his bilingual anthology of German-Jewish soldier poems is forthcoming.

Avner Holtzman is a professor of Hebrew literature in Tel-Aviv University and a member of the Israel National Academy of Sciences. He specializes in Hebrew literature written between the nineteenth century and the present day. His research encompasses a wide variety of issues, but most of it is dedicated to prominent figures of the modern Hebrew literary canon. He published comprehensive editions of the writings of H. N. Bialik and M.Y. Berdichefsky, as well as critical biographies of these two writers. His publications in English include editing the Hebrew literature section of The YIVO Encyclopedia of Jews in Eastern Europe. His latest book is Hayim Nahman Bialik: Poet of Hebrew.

An interesting and exciting book. A rare tale of extraordinary and sometimes even unbelievable human suffering. It is an achievement of Appelbaum’s to open this valuable document to the public.

– Georg Wurzer, author of The Prisoners of War of the Central Powers in Russia during WWI

For eighty-five years, one of the major novels to come out of World War I has been waiting for an English translation like Peter Appelbaum’s. It is not a book for the faint of heart. The strong-minded will appreciate its unflinching humanity.

There were eight million prisoners of war in the 1914-18 conflict. Here is one soldier’s tale relating stories of Jewish men among them, trapped in lice and typhoid infested camps in Russia. Hameiri’s voice is a Cri de Coeur against the stupidities and cruelties of war; an All Quiet on the Eastern Front for our times.

– Jay Winter, professor of history at Yale University and author of War Beyond Words: Languages of Remembrance from the Great War to the Present

Appearing for the first time in English, Hell on Earth adds an important and little known element to the First World War literary canon. With an introduction by Avner Holzman, this translation from Hebrew brilliantly captures Hameiri’s unique mixture of brutal realism, cultural and political comment, and even some gallows humor.

This harrowing novel by one of the most unique war novelists in modern Hebrew literature is a chilling account of the horrors of WWI, which proved an all too real rehearsal for the Second World War only a few decades later. Hameiri's horrendous experiences as a war prisoner are recounted with a chilling directness that becomes especially haunting as a prelude to the Holocaust. It is also one of the only literary accounts of Jewish soldiering prior to the establishment of Israel that expresses some of the paradoxes of Jewish existence in the modern era and of Zionism as a radical response to it. A profound and important book.

The book is important as war literature and as prisoner-of-war literature and deserves a wide reading. The writing is graphic and the horrors of war are presented in a manner that few will forget. Hell on Earth is a vivid reminder that the tragedy of war never should be forgotten or minimized. It is a book to read and on which to reflect. Those who do so will not be disappointed.