Home » Books » The Heart Is a Mirror 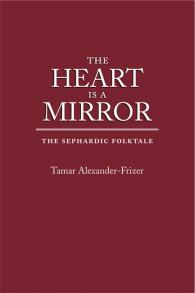 The Heart Is a Mirror

The Heart Is a Mirror, first written in Hebrew and now well translated into English, offers new approaches to the study of oral transmission and is a major contribution to the field.

Since their expulsion from Spain in 1492, Sephardic Jews have managed to maintain their Jewish faith and Spanish group identity and have developed a uniquely Judeo-Spanish culture wherever they settled. Among the important cultural ties within these Sephardic groups are Judeo-Spanish folktales, stories that have been passed down from generation to generation, either in the distinct language of the group, Judeo-Spanish (Ladino), or in other languages, such as Hebrew. In The Heart Is a Mirror, Tamar Alexander-Frizer examines the folk narratives of Sephardic Jews to view them both in relation to universal narrative traditions and the traditions of Jewish culture.

In part 1, Alexander-Frizer investigates the relationship between folk literature and group identity via the stories’ connection to Hebrew canonical sources, their historical connection to the land of origin, their treatment of prominent family members and historical events, and their connection to the surrounding culture in the lands of the Spanish Diaspora. Part 2 contains an analysis of several important genres and subgenres present in the folktales, including legends, ethical tales, fairy tales, novellas, and humorous tales. Finally, in part 3, Alexander-Frizer discusses the art of storytelling, introducing the theatrical and rhetorical aspects tied up in the Sephardic folktales, such as the storyteller, the audience, and the circumstances of time and place.

This thorough and thought-provoking study is based on a corpus of over four thousand stories told by descendents of the Spanish Diaspora. An introduction addresses methodological problems that arise from the need to define the stories as Judeo-Spanish in character, as well as from methods used to record and anthologize them. Jewish studies scholars, as well as those interested in folktale studies, will gain much from this fascinating and readable volume.

Tamar Alexander-Frizer is Frankfurter Chair for Sephardic studies, head of the folklore program, and director of the Gaon Center for Ladino Culture at Ben-Gurion University, Beer Sheba, Israel.

Tamar Alexander-Frizer...adds another remarkable volume to today's flourishing production of landmark works on Jewish folk literature. . . . She is exceedingly skillful at using folkloristic and literary analytical tools to get at the meanings traditional narratives hold for their Sephardic audiences. No doubt her membership in that audience has been a help to her, but one senses that her insights come only after repeated hearings (and readings) and a lifetime of thinking about the stories. The fullness of meaning emerges in story after story as the author moves thoroughly and methodically through tales and genres. Readers will be grateful for her insights.

This book is not only for folklorists and academics but for anyone interested in the Jewish oral tradition in all its complexity and variety. The author's research into 4,000 Sephardic folktales is thorough and a number of stories and excerpts pepper the book as illustrations throughout."

Until recently only the Sephardic ballad was well represented in English language scholarship. Now, with Alexander-Frizer's book, we have a fine guide to the Sephardic prose narrative traditions to go along with the recently translated anthologies of Sephardic folk narrative.

This magnificent book is a must not only for every scholar and lover of Jewish folk narratives but also for all folklorists and all those interested in oral verbal creativity. The rich cultural information and the methodological savvy introduced by the author to her analyses of narratives that perform identity in multiple ways-including historical, linguistic, national, and gender-render the book a true mine of knowledge and an enjoyable read."

– Galit Hasan-Rokem, Max and Margarethe Grunwald Professor of Folklore at the Hebrew University of Jerusalem

The Heart Is a Mirror, first written in Hebrew and now well translated into English, offers new approaches to the study of oral transmission and is a major contribution to the field."

– Moshe Lazar, professor of comparative literature at the University of Southern California and author of The Sephardic Tradition: Ladino and Spanish-Jewish Literature and other books