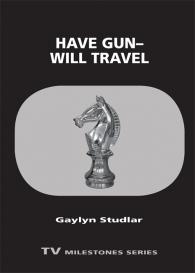 One of the most successful series of its time, Have Gun—Will Travel became a cultural phenomenon in the late 1950s and made its star, Richard Boone, a nationwide celebrity. The series offered viewers an unusual hero in the mysterious, Shakespeare-spouting gunfighter known only as "Paladin" and garnered a loyal fan base, including a large female following. In Have Gun—Will Travel, film scholar Gaylyn Studlar draws on a remarkably wide range of episodes from the series’ six seasons to show its sophisticated experimentation with many established conventions of the Western.

Studlar begins by exploring how the series made the television Western sexy, speaking to mid-twentieth century anxieties and aspirations in the sexual realm through its "dandy" protagonist and more liberal expectations of female sexuality. She also explores the show’s interest in a variety of historical issues and contemporaneous concerns—including differing notions of justice and the meaning of racial and cultural difference in an era marked by the civil rights movement. Through a production history of Have Gun—Will Travel, Studlar provides insight into the television industry of the late 1950s and early 1960s, showing how, in this transition period in which programming was moving from sponsor to network control, the series’ star exercised controversial influence on his show’s aesthetics.

Because Have Gun—Will Travel was both so popular and so different from its predecessors and rivals, it presents a unique opportunity to examine what pleasures and challenges television Westerns could offer their audiences. Fans of the show as well as scholars of TV history and the Western genre will enjoy this insightful volume.

Gaylyn Studlar is David May Distinguished University Professor in the Humanities and director of the program in film and media studies at Washington University in St. Louis. Among her many books are John Ford Made Westerns: Filming the Legend in the Sound Era, co-edited with Matthew Bernstein, and This Mad Masquerade: Stardom and Masculinity in the Jazz Age.

A smart, illuminating, and entertaining return to this memorable TV show. Along the way, Gaylyn Studlar situates the landmark series’ hero in multiple fascinating contexts ranging from the lone Westerner to the Victorian dandy to the postwar playboy bachelor, just as she traces the overlapping layers of cultural history, past and present, which the show draws upon. A fun and informative read!

– Steven Cohan, Distinguished Professor Emeritus, Department of English, Syracuse University and author of Masked Men: Masculinity and the Movies in the Fifties and Incongruous Entertainment: Camp, Cultural Value, and the MGM Musical

This volume is a superb engagement with the TV Western, demonstrating, through its scholarship and criticism, a sense of the series' value and significance to our culture, argued with great seriousness of purpose.

In spite of his popularity, the hero of Have Gun—Will Travel in no way resembled Gunsmoke’s Matt Dillon. As Gaylyn Studlar brilliantly argues, Have Gun questioned the very values that Westerns were supposed to uphold. This is a very smart book about a very smart television program.

Have Gun--Will Travel and Paladin provide significant insights into the television Western of the 1950s adn early 1960s, and Studlar makes an important contribution to the TV Milestones Series.

Have Gun--Will Travel and Paladin provide significant insights into the television Western of the 1950s adn early 1960s, and Studlar makes an important contribution to the TV Milestones Series.

– Ron Briley, Journal of the West

Have Gun— Will Travel by Gaylyn Studlar is not only a very thorough and thoughtful analysis of the themes and characters behind HGWT, but it is also an excellent straight guide to the TV series, which these days may be watched most accessibly via YouTube.