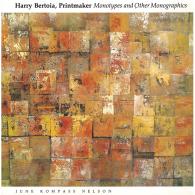 Monotypes and Other Monographics

The seventy-nine monotypes in this catalogue represent the principal styles and themes that emerged not only in Harry Bertoia's printmaking, but in his sculpture as well. June Kompass Nelson, author of Harry Bertoia, Sculptor, analyzes the graphic works and places them in the context of Bertoia's total oeuvre, with particular regard to their relationship with his sculpture. A teacher of metalwork and printmaking at the Cranbrook Academy of Arts in Bloomfield Hills, Michigan, Bertoia began working in monotype in 1940—nearly a decade before his first attempts at sculpture—and continually returned to the medium until his death in 1978. Nelson's introduction, biographical material, and well-documented chronology contribute to the portrait of a Michigan artist of international repute who maintained his "regionalist sensibility".

June Compass Nelson has taught at Wayne State University and the University of Michigan, Dearborn. She is the author of Harry Bertoia, Sculptor.