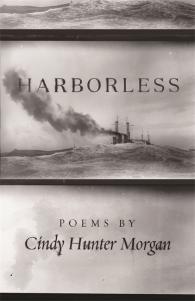 Harborless, a collection of poems informed by Great Lakes shipwrecks, is part history and part reinvention. The poems explore tragic wrecks in rivers and lakes, finding and forming artistic meaning from destruction and death. Each poem begins in a real, historical moment that Cindy Hunter Morgan transforms into an imagined truth. The imaginative element is essential to this work as it provides a previously unseen glimpse into the lives affected by shipwrecks. The poems in Harborless confront the mysteries surrounding the objects that cover the floor of the Great Lakes by both deepening our understanding of the unknown and teaching great empathy for a life most of us will never know.

Morgan creates a melodic and eerie scene for each poem, memorializing ships through lines such as, "Fishermen wondered why they caught Balsam and Spruce / their nets full of forests, not fish," and "They touched places light could not reach." Most of the poems are titled after the name of a ship, the year of the wreck, and the lake in which the ship met disaster. The book’s time frame spans from wrecks that precede the Civil War to those involving modern ore carriers. Throughout this collection are six "Deckhand" poems, which give face to a fully imagined deckhand and offer a character for the reader to follow, someone who appears and reappears, surfacing even after others have drowned. Who and what is left behind in this collection speaks to finality and death and "things made for dying." Very little is known when a ship sinks other than the obvious: there was a collision, a fire, a storm, or an explosion. Hunter works to fill in these gaps and to keep these stories alive with profound thoughtfulness and insight.

Tony Hoagland said that one of the powers of poetry is to locate and assert value. This collection accomplishes that task through history and imagination, producing lake lore that will speak to historians and those interested in ships, poetry, and the Great Lakes.

In Cindy Hunter Morgan’s elegant collection, Harborless, the unique power of historic poetry is on full display. These meticulous and striking poems balance imagination and fact to explore the complex maritime narratives of the Great Lakes. The result is an important and refreshing book full of unexpected histories and wonder.

Art and history, geography and prosody, folklore, flotsam, salvage and ruin: Harborless is freighted with scholarship, imaginative heft, and virtuosity. For the stargazer, horizon scanner, boatman and long-hauler, storm watcher and lighthouse keeper, Cindy Hunter Morgan has wrought a Great Lakes classic: an epic paid out in local, heroic, and poignant doses. Brava!

With each poem, she deep dives into another Great Lakes shipwreck. Most are real, a few imaginary, but each is seen from a unique perspective.

The heart of Harborless lies in the imaginative poetry. Just like the wrecks, no two poems are alike.

Here, a shipload of cast iron stoves slips to the bottom of the lake, where it will rest forever among the teacups, the crankshafts, the revolvers, and the bones of sailors. On one level, Cindy Hunter Morgan’s Harborless is a deft and moving chronicle of forty shipping catastrophes in the Great Lakes, described with loving attention to detail, to the tiny particulars that create our sense of a whole story. But on a greater level, this is also a book about the transience of human experience, the vagaries of memory, and the forces that buffet all of us, often wildly and violently, during and after our lives. Harborless is a brilliant first book, one that will continue to haunt me.

For those of us who have lived most of our lives within a heavy wind's blow of the Great Lakes, there can exist in our hearts a vicarious connection to the men and women who have plied those expanses of ice water over the centuries. We watch the waves bow themselves like mendicants upon Lake Michigan's beaches, begging Chicago to notice, or watch the sprays toss themselves on Lake Superior's cliffs as if they could claw their way to the summits, and we feel something in our hearts crash quietly in response, tugging our bodies back to the warmth of the hearth even as our minds are tugged across the waters like desperate barges. Cindy Hunter Morgan has felt that same tug, and responded with the poems of Harborless.

Morgan's collection is a powerful exploration of realities that characterized the development of the shipping industry in the Great Lakes region and the lives of those who gave up safe harbor to sail the Lakes. She skillfully captures the longing, loss, and drive to understand not just the facts of historic shipwrecks, but what those wrecks can also tell us about the people who sailed them to both profitable and tragic destinations.

This book is exactly the collection to appeal to experienced readers of poetry as well as readers who believe they don’t like poetry. Its content is compelling and its characters are sympathetic, as in the best fiction, yet its craft is both skillful and subtle. Reading and rereading this book has been exceptionally satisfying.

With each poem, she deep dives into another Great Lakes shipwreck. Most are real, a few imaginary, but each is seen from a unique perspective.

2 days 31 min ago
Now a National Jewish Book Award Finalist! @JewishBook https://t.co/qTKAeUEPVX
2 days 3 hours ago
RT @Steph_Steinberg: Tomorrow @ 7 p.m.! Join me and @DETWritingRoom at The Whitney for our first #2023AuthorSeries event ft. @waynestate… https://t.co/pssbi2NLNs
6 days 5 hours ago
SAVE THE DATE! Join author Desiree Cooper and illustrator Bec Sloane this Saturday for a behind the scenes look at… https://t.co/cKDBmbewOa