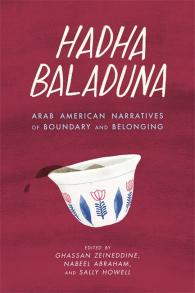 Hadha Baladuna ("this is our country") is the first work of creative nonfiction in the field of Arab American literature that focuses entirely on the Arab diaspora in Metro Detroit, an area with the highest concentration of Arab Americans in the US. Narratives move from a young Lebanese man in the early 1920s peddling his wares along country roads to an aspiring Iraqi-Lebanese poet who turns to the music of Tupac Shakur for inspiration. The anthology then pivots to experiences growing up Arab American in Detroit and Dearborn, capturing the cultural vibrancy of urban neighborhoods and dramatizing the complexity of what it means to be Arab, particularly from the vantage point of biracial writers. Included in these works is a fearless account of domestic and sexual abuse and a story of a woman who comes to terms with her queer identity in a community that is not entirely accepting. The anthology concludes with explorations of political activism dating back to the 1960s and Dearborn’s shifting demographic landscape.

Hadha Baladuna: Arab American Narratives of Boundary and Belonging begins contains stories of immigration and exile by following newcomers’ attempts to assimilate into American society. Editors Ghassan Zeineddine, Nabeel Abraham, and Sally Howell have assembled a cast of emerging and established writers from a wide array of communities, including cultural heritages originating from Lebanon, Palestine, Iraq, and Yemen. The strong pattern in Arab Detroit today is to oppose marginalization through avid participation in almost every form of American identity-making. This engaged stance is not a byproduct of culture, but a new way of thinking about the US in relation to one’s homeland.

Ghassan Zeineddine is assistant professor of English at the University of Michigan-Dearborn.
Nabeel Abraham taught anthropology for nearly three decades at Henry Ford College in Dearborn, Michigan, where he also directed the honors program. He retired in 2013.
Sally Howell is associate professor of history at the University of Michigan-Dearborn and director of the Center for Arab American Studies.

I want to hug this book. Reading it is like walking into a home where onions are frying with cilantro while someone pounds garlic cloves with a mortar and pestle and someone else is pouring bubbling syrup over the kunafeh just out of the oven, and everyone’s talking at the same time, and one person is singing. Your mouth is watering for the meal to come, and you’re wishing you lived there even though you know if you did it might be too much some days, and so you’re happy to be visiting. This book is a multi-course meal; I want to eat up every bite. Aside from hugging or eating it, I will be using the rich contributions in this well-made book for teaching Arab American literature, gender studies, and Muslim devotional and aesthetic interaction with the Quran.

Hadha Baladuna brings together evocative creative pieces that speak poignantly to the contributors’ deep and intimate connections to Detroit and Dearborn. The strong voices and characters we encounter capture the vibrancy of these cities, buzzing with the sounds, smells, and sights of Arab homes and homelands, while also evoking the tensions and pain dividing and connecting generations of Arab immigrant families that have chosen these cities as their home. Hadha Baladuna brings fresh and valuable perspectives to the complexities of Arab lives in the U.S.

4 hours 7 min ago
@j_a_elster, author of HOW IT HAPPENS will be signing books from 2pm-3pm! https://t.co/jiez2c4mnH
1 day 2 hours ago
RT @DarkProjections: Celebrating #Kolchak release day with an appearance on @richardsyrett’s Strange Planet. We talk all things NIGHT ST… https://t.co/96VJZhpsti
1 day 7 hours ago
RT @zoebossiere: So thrilled to announce a new anthology, THE LYRIC ESSAY AS RESISTANCE: TRUTH FROM THE MARGINS, w/ @ericatrabold av… https://t.co/LixsspYdKb