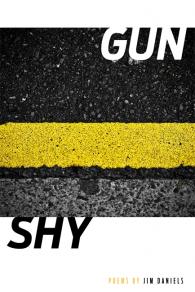 The poems in Gun/Shy deal with the emotional weight of making do. Tinged with both the regrets and wisdom of aging, Jim Daniels’s poems measure the wages of love in a changing world with its vanishing currency. He explores the effects of family work—putting children to bed, leading parents to their final resting places—and what is lost and gained in those exertions. Childhood and adolescence are examined, through both looking back on his own childhood and on that of his children. While his personal death count rises, Daniels reflects on his own mortality. He finds solace in small miracles—his mother stretching the budget to feed five children with "hamburger surprise" and potato skins, his children collecting stones and crabapples as if they were gold coins.

Daniels, as he always has, carries the anchor of Detroit with him, the weight both a comfort and a burden. He explores race, white privilege, and factory work. Eight Mile Road, a fraught border, pulses with division, and the echoes of music, singing through Detroit’s soiled but solid heart, resonate in these poems. His first long poem in many years, "Gun/Shy," centers the book. Through the personas of several characters, Daniels dives into America’s gun culture and the violent gulf between the fearful and the feared.

Throughout, he seeks connection in likely and unlikely places: a river rising after spring rain and searchlights crossing the night sky. Comets and cloudy skies. Cement ponds and the Garden of Eden. Adolescence and death. Wounds physical and psychic. Disguises and more disguises. These are the myths we memorize to help us sleep at night, those that keep us awake and trembling. Daniels’s accessible language, subtlety, and deftness make this collection one that belongs on every poetry reader’s shelf.

A native of Detroit, Jim Daniels currently lives in Pittsburgh and is the Thomas S. Baker University Professor Emeritus at Carnegie Mellon. His recent books include Rowing Inland (Wayne State University Press, 2017) and The Perp Walk. He also coedited the anthology RESPECT: The Poetry of Detroit Music.

Jim Daniels is one of our best chroniclers of an American past that is, for better and worse, gone. As such, his is a poetry that laments and celebrates our present moment—its people, the lives they live, the ideas they live by, and the places, people, and things they call theirs. When one of his speakers says, ‘Today, / I’m just watching. Carried away,’ you realize a pact has been made (between the speaker and world) and a promise fulfilled (by the poet for the reader): that these poems will carry you away, that the voice behind them ‘wants to kneel on the floor / and whisper a prayer / like in the old days.’ Now more than ever, we need those prayers, and these poems.

– Hayan Charara, author of Something Sinister

In this new collection by one of our country’s best poets, Daniels brings us the news from this world and transforms it into the news from beyond this world. These are poems of time and place, written in familiar voices, suggesting narratives that could be our own, but he’s infused each line, each poem, with mystery and music. These are poems that escape their form, and remake themselves in the reader’s mind—in our moment and in our memory. This is poetry that inspires and terrifies. These lines are poignant, unforgettable, resonant, but somehow remain conversational, as if this poet is simply tossing off brilliance with each new observation, each sharp image. This is the strongest collection yet from one of our most important poets.

Daniels’ Gun/Shy is a journey. It is not just a book of poems, but a long journey from his childhood home of Warren and Detroit to adulthood, where somewhere along this long journey, the city evolved even as the author or we all evolved. There is something profound about Jim Daniels’ ability to humble us through poetry that is self-effacing at a moment in history where we most need to step away from ourselves in order to know the larger world outside of us. These powerful poems will make you laugh, wonder, pause, but long after you have laid the book down, deep inside your heart, they will reveal something profound about the way we all become survivors. This is an urgently necessary book coming to us at such a time.

Jim Daniels’ poetry explores not only the realities of a blue-collar, late twentieth-century, upper Midwest childhood, but the entirety of America’s sociocultural whirlwind throughout these last six decades. Few writers believe more deeply in poetry’s capacity to document the world, and documentation, in his hands, is a form of homage. Sure, Gun/Shy is a new chapter in Daniels’ grand, literary-historical project—more importantly, it is an essential collection from one of our contemporary masters.

Jim Daniels’ newest collection of poetry, "Gun/Shy (https://www.wsupress.wayne.edu/books/detail/gunshy)," published by Wayne State, has Daniels at his best with his more than 50 poems covering topics as varied as his mother’s "hamburger surprise" to race, privilege and factory work. Daniels’ work has always been autobiographical in nature. All I can say about this collection of poetry is that it will bite you in the ass with its frankness.

In Jim Daniels’ latest poetry collection "Gun Shy," life is refracted through various characters and through the poet’s own experiences. Daniels explores adolescence, mortality, race and many other issues.

Daniels, as he always has, carries the anchor of Detroit with him, the weight both a comfort and a burden. He explores race, white privilege, and factory work. Eight Mile Road, a fraught border, pulses with division, and the echoes of music, singing through Detroit's soiled but solid heart, resonate in these poems. His first long poem in many years, "Gun/Shy," centers the book. Through the personas of several characters, Daniels dives into America's gun culture and the violent gulf between the fearful and the feared.
The titular poem "Gun/Shy" critically examines America's obsessive gun culture and its horrifying fallout. Candid, accessible, and unforgettable, Gun/Shy is highly recommended for personal and public library poetry collections.

Gun/Shy has a great deal to offer those new to the poetry of Jim Daniels as well as those who have followed his work for many years. It is both another entry in his series of reflections on class, work, and family, as well as a signal that his work is tackling new milieus and themes, most notably mortality. Another memorable poem from late in the collection, ‘Tying My Show at the New Pornographers Concert,’ places the narrator at a contemporary indie rock concert, enjoying the show while also ‘looking for someone my age.’ He writes, ‘I’m 59, going on whatever’s next.’ Readers of Gun/Shy will definitely find themselves eager to find out what’s next for Daniels and his still-engaging poetry.

20 min 22 sec ago
TONIGHT! Join @stephanie_heit at @ShopBooksweet for local author's night! https://t.co/pTny5OErDe
22 hours 3 min ago
Have you had a chance to check out our new Spring & Summer 2023 Catalog?! From a new lyric essay collection to a p… https://t.co/cNAo9WjL9K
1 day 20 hours ago
RT @shondabuchanan: Tonight! Feb. 1, 2023, 6:30pm Mountain Time -- Virtual reading for #lewisandclarklibrary Lewis & Clark Library in H… https://t.co/UAmMoIlq1w