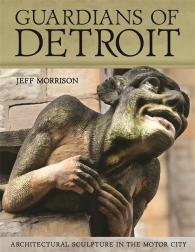 Architectural Sculpture in the Motor City

Detroit is home to amazing architectural sculpture—a host of gargoyles, grotesques, and other silent guardians that watch over the city from high above its streets and sidewalks, often unnoticed or ignored by the people passing below. Jeff Morrison’s Guardians of Detroit: Architectural Sculpture in the Motor City documents these incredible features in a city that began as a small frontier fort and quickly grew to become a major metropolis and industrial titan.

Detroit developed steadily following its founding in 1701. From 1850 to 1930 it experienced unprecedented population growth, increasing from 21,019 to over 1,500,000 people. A city of giants, Detroit became home to people of towering ambition and vision who gained wealth and sought to leave their mark on the city they loved. This aspiration created a massive building boom during a time when architectural styles favored detailed ornamentation, resulting in a collection of architectural sculpture unmatched by any other U.S. city. Guardians of Detroit is a first-of-its-kind project to explore, document, and explain this singular collection on a building-by-building basis and to discover and share the stories of these structures and the artists, artisans, and architects who created them. Using a 600-millimeter lens and 23-megapixel camera, Morrison brings sculptural building details barely visible to the naked eye down from the heights, making them available for up-close appreciation. The photos are arranged in a collage format that emphasizes the variety of and relationships between each building’s sculptural ornamentation. Well-researched text complements the photography, delving into the lives of those who created these wonderful works of architectural art.

Guardians of Detroit is an extended love letter to the historic architecture of a city that would become the driving force of America’s industrial and economic power. Fans of art, architecture, and hidden gems will love poring over these pages.

Jeff Morrison is a historian and photographer who has been taking pictures since his parents gave him his first camera at age nine. He has a bachelor’s degree in history and art from Eastern Michigan University and over thirty years’ experience as a graphic artist. Jeff lives in Oxford, Michigan, with his lovely wife, Susie, and their wonder dog, Manfred.

Jeff Morrison’s Guardians of Detroit: Architectural Sculpture in the Motor City is a must-read for any Detroit enthusiast, a thoroughly engaging visual and historical tour through the city’s remarkably ornamented past. Morrison writes with a light, knowing touch, every bit as easy with architecture as the sculpture adorning it. His crisp photographs illustrate a Detroit most of us have never seen, alive with griffins and gargoyles, while his pictures of familiar buildings are often fresh and indelible. This is a book worth savoring, one that will stimulate interest in Detroit on the part of anyone lucky enough to page through it.

Jeff Morrison’s work is a welcome addition to the growing body of texts celebrating Detroit architecture. Well researched and lovingly illustrated with thoughtfully composed photographs, Guardians of Detroit inspires the reader to explore our culturally rich city. It provides a unique vantage point, and a complimentary perspective to the works of W. Hawkins Ferry, Eric J. Hill, John Gallagher, Dennis Nawrocki, and Balthazar Korab. In a time of ephemerality of information and ideas, it is refreshing to discover the enduring gifts of artists in metal and stone.

Jeff Morrison is a gifted photographer whose lens offers up a stunning world of sculptural detail to all interested in architecture and art history. As Detroit rebuilds and interest in the city is on the rise, Guardians of Detroit, with its place specificity and pictorial richness, comes at just the right time to remind us of the value of the city’s rich design legacy.

Lavishly illustrated, [a] coffee table book to be savored and paged through at leisure.

Until Oxford, Michigan, photographer and writer Jeff Morrison decided to photograph these incredible adornments they were undocumented and often overlooked.

Jeff Morrison’s "Guardians" is a beautiful and exhausting tour of Detroit’s classic buildings, as well as the gargoyles, griffins and various creatures which adorn them. The 350-page book has more than 750 photographs which are accompanied by a crisp history of the building and the men who built them.

Interview with Library of Michigan (August 6, 2020)