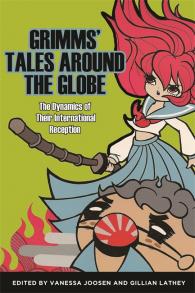 Grimms' Tales around the Globe

The Dynamics of Their International Reception

Grimms’ fairy tales are among the best-known stories in the world, but the way they have been introduced into and interpreted by cultures across the globe has varied enormously. In Grimms’ Tales around the Globe, editors Vanessa Joosen and Gillian Lathey bring together scholars from Asia, Europe, and North and Latin America to investigate the international reception of the Grimms’ tales. The essays in this volume offer insights into the social and literary role of the tales in a number of countries and languages, finding aspects that are internationally constant as well as locally particular.

In the first section, Cultural Resistance and Assimilation, contributors consider the global history of the reception of the Grimms’ tales in a range of cultures. In these eight chapters, scholars explore how cunning translators and daring publishers around the world reshaped and rewrote the tales, incorporating them into existing fairy-tale traditions, inspiring new writings, and often introducing new uncertainties of meaning into the already ambiguous stories. Contributors in the second part, Reframings, Paratexts, and Multimedia Translations, shed light on how the Grimms’ tales were affected by intermedial adaptation when traveling abroad. These six chapters focus on illustrations, manga, and film and television adaptations. In all, contributors take a wide view of the tales’ history in a range of locales—including Poland, China, Croatia, India, Japan, and France.

Grimms’ Tales around the Globe shows that the tales, with their paradox between the universal and the local and their long and world-spanning translation history, form a unique and exciting corpus for the study of reception. Fairy-tale and folklore scholars as well as readers interested in literary history and translation will appreciate this enlightening volume.

Vanessa Joosen is a postdoctoral researcher at Tilburg University and visiting professor of children’s literature at the University of Antwerp. She is the author of Critical and Creative Perspectives on Fairy Tales (Wayne State University Press, 2011).

In Grimms’ Tales around the Globe, Vanessa Joosen and Gillian Lathey offer a thoughtfully assembled collection of essays which provides exciting new insights into the cross-cultural reception of the tales. From a wide range of perspectives, a broad spectrum of international scholars examine the translations, adaptations, and transformations of the tales in different parts of the globe—as wide-ranging as Colombia, Croatia, and China. The truly international dimension of this volume will make it a valuable resource for scholars, researchers, students, and all those interested in the Grimms’ fairy tales in a global context.

This collection explores the reception of the Grimms's tales in countries such as Colombia, Japan, and Croatia. The clearly written and well-researched essays not only trace transmission and reception via the use of editions and translations, but also offer insights into cultural influences on how readers viewed the Grimms's fairy tales and how those cultural and transmission forces shaped selection of particular tales from Kinder und Hausm?rchen. The essays cover initial transmission and trace influence well past their first introdution to offer observations about 20th-century reconfigurations of the stories in print and film. For example, in Colombia the influences of Disney and of politics are important to understanding the ways the Grimms's tales were received and shaped there. The issues of translation and transformations of the tales get special attention in essays in the latter part of the book. Considerations of illustrations, films, the influence of Perrault in the French context, manga, television, and comic books round out the collection. As a fascinating study of the Grimms's contributions to both fairy tales and cultural productions, this book would be especially valuable to students of world literatures, cultural studies, and fairy-tale transmission.

Nevertheless, this ‘thoughtfully assembled collection’ of ‘engaging, eminently readable essays’, to use the wording of Sandra L. Beckett and John Stephens printed on the back cover, is, both in scope and in quality, a major contribution to the study of the Grimms’ fairy tales.