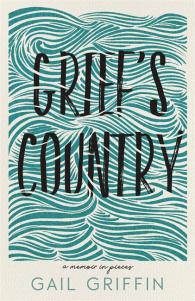 A Memoir in Pieces

Gail Griffin had only been married for four months when her husband’s body was found in the Manistee River, just a few yards from their cabin door. The terrain of memoir is full of stories of grief, though Grief’s Country: A Memoir in Pieces is less concerned with the biography of a love affair than with the lived phenomenon of grief itself—what it does to the mind, heart, and body; how it functions almost as an organism. The book’s intimacy is at times nearly disarming; its honesty about struggling through grief’s country is unfailing.

The story is told "in pieces" in that it is ten essays of varying forms, punctuated by four original poems, that examine facets of traumatic grief, memory, and survival. While a reader will perceive a forward trajectory, the book resists anything like a clear chronology, offering a picture of deep grief as something that defies the linear and explodes time. "A Strong Brown God" tells the story of two of Griffin’s significant relationships—with her husband, Bob, and with the Manistee River—and includes the history of what drew them all together. "Grief’s Country" follows Griffin from the morning after Bob’s death through the first disoriented, fractured months of PTSD. "Heartbreak Hotel" takes Griffin on a tragicomical flight the first Christmas after Bob’s death to a Jamaican resort—which includes an unscheduled stop at Graceland—where she contemplates the notions of home and haven.

Grief’s Country will speak directly to anyone who has lost a dearly loved one, offering not one story but ten different faces of grief to contemplate. It will also appeal to general readers of memoir, including teachers and students of nonfiction, especially as it includes a variety of formal models. Those interested in the subject area of death and dying will find it useful as a book that bypasses recovery narratives, truisms, and "stages of grief" to get as close as possible to the experience itself.

Gail Griffin is the author of four books of nonfiction, including "The Events of October": Murder-Suicide on a Small Campus (Wayne State University Press, 2010). Her award-winning nonfiction and poetry have appeared in venues including The Missouri Review, The Southern Review, Fourth Genre, and The New Ohio Review, and anthologies including Fresh Water: Women Writing on the Great Lakes, a Michigan Notable Book.

Grief’s Country is a powerful and lyrical meditation upon loss. It is also a celebration of those moments in our lives that redeem our mortality through their transient joys. Here, grief is deeply personal yet transcendently mythic, both heart-breaking and heart-mending. Griffin has written a remarkably honest, tragically beautiful memoir.

A fiercely honest, deeply human examination of grief’s gradations, shades, nuances, and degrees, as well as its life-altering consequences. An essential book for anyone who has lost a loved one or knows someone who has.

In Grief’s Country, Gail Griffin embraces loss by navigating grief with an open heart. Griffin shares personal tragedy with such big-hearted courage that she lifts us up with her. Those who yearn for support will find tremendous comfort here. Grief’s Country is profoundly beautiful.

– Renée E. D’Aoust, author of Body of a Dancer

Gail Griffin’s lyrical Grief’s Country is a deeply considered meditation on grief, grace, and surviving the unimaginable. It’s a beautiful exploration of the human condition through the lens of loss.

Readers will have different experiences of grief, this island of unwilling visitors, but this book, with its honest depictions of one woman’s journey, offers a thoughtful view of how it feels, tastes, and hurts, and the struggle to move forward to a new space, a new life

Written in a series of essays and poems, Grief's Country: A Memoir in Pieces (Wayne State University Press, 2020) by Gail Griffin examines grief like a sculptor labors, working from a rough cut of life to give shape to the core within. The boo's success as a grief memoir is based in the immediate portrayal of her experience.

Interview on WGVU's The Morning Show with Shelley Irwin (April 8, 2020)