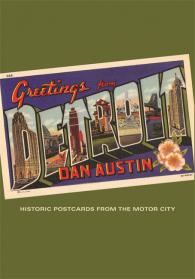 Historic Postcards from the Motor City

Greetings from Detroit: Historic Postcards from the Motor City offers a glimpse into the past through more than two hundred historic postcards of Detroit from the early 1900s to the 1950s, compiled and presented in full color by Dan Austin of HistoricDetroit.org. From familiar sights to long-lost landmarks, this book pairs vintage views with rich stories from the Motor City’s yesteryear.

In the era before cameras became commonplace, postcard shops were everywhere—allowing folks to send snapshots of their travels to friends and family, or to take home as mementos. Many of these old postcards are now sought-after collectibles today, offering a rare look back at a time of tremendous growth and change across Detroit during the first half of the twentieth century. Divided into six sections, Greetings from Detroit showcases the changing times and interests of the city—highlighting some of the distinct neighborhoods, including Midtown, southwest Detroit, and the downtown area. A portion of the book is devoted to Detroit’s parks, with special interest in Belle Isle, Palmer Park, Clark Park, and Water Works Park. The book also shines a light on the majestic steamers that often dotted the Detroit River. Greetings from Detroit gathers some of the best, most illustrative postcards in one place and—for the first time, in full color—frames them alongside meticulously researched writing, offering context and stories behind each image. It is a history book. It is a picture book. It is a window into the history of Detroit.

As the city grows and changes, there is value in observing a Detroit that is frozen in time. This beautiful collection would make an excellent conversation piece in the home of any local history aficionado.

Dan Austin is a former Detroit Free Press journalist who served as Mayor Mike Duggan’s deputy communications director before joining Van Dyke Horn public relations. He has been chronicling Detroit’s history for more than a decade and runs the online architectural resource HistoricDetroit.org. He is the author of Lost Detroit and Forgotten Landmarks of Detroit.

Old postcards not only give us a nostalgic view of the past, they show us what the past thought worth viewing. Dan Austin gives us the Detroit of the past as it saw itself and as we might like to see it.

– William M. Worden, retired director of Historic Designation for the city of Detroit

Dan Austin has created a remarkably broad and totally eye-popping collection of vintage postcards that will delight Detroit history newcomers and old-timers alike. This revealing book is packed with page after page of colorful views, terrific clothing, long-lost landscapes and stunning architecture. I bet there's at least one building in this book you never knew existed!

This delightful book blends a lot of history and a bit of whimsy into a thoroughly engaging tour of Detroit’s past as seen through the medium of the humble postcard.

Dan Austin delivers an enjoyable tour of Detroit during the great era of postcards—1890-1930—a period coinciding with vibrant growth and architectural development in the city. The color images show the most memorable structures and popular parks, but also the fleeting moments and trifling views enjoyed by our peers a century ago. Well-researched captions put the scenes in context, making this a valuable addition to any Detroiter’s collection.

"Greetings from Detroit" by former Detroit Free Press journalist Dan Austin is an excellent reference and resource book for those who have fond memories of the large metropolis.

Dan Austin, former Detroit Free Press journalist, first fell in love with these images of Detroit gone by when a colleague brought in a binder full of them. Thus, a deltiologist (postcard collector) was born. This book charmingly offers over two hundred of these glimpses, each with a very helpful paragraph-long description. The book is organized into geographic sections (East side, West side, Midtown, and Downtown) as well as including chapters on Parks and Steamers. Prepare to set aside a few hours once you open it, as these little works of art, and the stories they tell, are truly captivating.