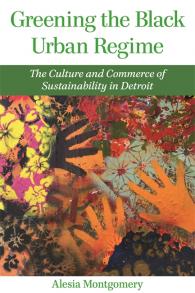 The Culture and Commerce of Sustainability in Detroit

Alesia Montgomery’s Greening the Black Urban Regime: The Culture and Commerce of Sustainability in Detroit tells the story of the struggle to shape green redevelopment in Detroit. Cultural workers, envisioning a green city crafted by direct democracy, had begun to draw idealistic young newcomers to Detroit’s street art and gardens. Then a billionaire developer and private foundations hired international consultants to redesign downtown and to devise a city plan. Using the justice-speak of cultural workers, these consultants did innovative outreach, but they did not enable democratic deliberation. The Detroit Future City plan won awards, and the new green venues in the gentrified downtown have gotten good press. However, low-income black Detroiters have little ability to shape "greening" as uneven development unfolds and poverty persists.

Based on years of fieldwork, Montgomery takes us into the city council chambers, nonprofit offices, gardens, churches, cafés, street parties, and public protests where the future of Detroit was imagined, debated, and dictated. She begins by using statistical data and oral histories to trace the impacts of capital flight, and then she draws on interviews and observations to show how these impacts influence city planning. Hostility between blacks and whites shape the main narrative, yet indigenous, Asian, Arab, and Latinx peoples in Detroit add to the conflict. Montgomery compares Detroit to other historical black urban regimes (HBURs)—U.S. cities that elected their first black mayors soon after the 1960s civil rights movement. Critiques of ecological urbanism in HBURs typically focus on gentrification. In contrast, Montgomery identifies the danger as minoritization: the imposition of "beneficent" governance across gentrified and non-gentrified neighborhoods that treats the black urban poor as children of nature who lack the (mental, material) capacities to decide their future. Scholars and students in the social sciences, as well as general readers with social and environmental justice concerns, will find great value in this research.

Alesia Montgomery is an urban ethnographer and independent researcher. She works as the subject specialist for sociology, psychology, and qualitative data at Stanford University, and is a member of the Research Advisory Board for the Qualitative Data Repository at Syracuse University (2020 to 2021). Her publications include articles in the International Journal of Urban & Regional Research, City & Community, Ethnography, Antipode, and Global Networks.

With captivating prose and insightful analysis, Alesia Montgomery has crafted an extraordinary book about Detroit. Greening the Black Urban Regime vividly demonstrates why any effort to create ‘greener’ cities must also address the systemic racism that underlies the status quo of urban development in America today.

In Greening the Black Urban Regime, Montgomery provides a vibrant and highly original account of the shifting intersections between race, class, and urban environmental politics in post-industrial Detroit. With her meticulous analysis and eloquent prose, Montgomery has marked out a distinctive intellectual terrain at the interface of critical black studies, oral history, and sustainability discourse.

Greening the Black Urban Regime illuminates the ‘politics of the return’—the structural and interpretive contexts in which sustainability planners, growth elites, and community/arts activists shape the gentrification in majority-black cities. The historical bridges and everyday dialogues that Montgomery establishes should stay with urban scholars for a long time.

An impressive work of meticulous scholarship [. . .] will prove to be of immense interest and value for both academia and the non-specialist general reader with an interest in social and environmental justice concerns arising from Urban Renewal projects utilizing Detroit's experience as an example.

Montgomery’s work is a model for not only scholarly inquiry, but also for how to craft and do the work of listening to a city, to your respondents, to the ancestors.

Greening the Black Urban Regime is easily the best ethnographic account available of twenty-first- century Detroit. It is a substantial contribution to urban political theory, African American studies, and sustainability studies, and it is also a good read.

Instead, she situates a changing Detroit in the broader landscape of Black urban politics and contemporary environmental justice concerns—both of which are crucial considerations across disciplines. As she does this, she moves effortlessly between scales, from the boardroom to the corner grocery. This level of intimacy is rare in academic writing. It is possible in large part because she moved to Detroit out of a commitment to engaged and accountable scholarship. For three years she walked its streets, attended its events, and chatted with its residents. She captures these in such detail that by the book’s end, we feel we have too.