Home » Books » For the Good of the Children 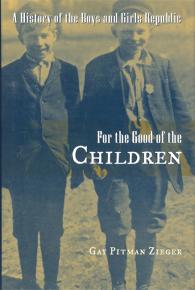 For the Good of the Children

A History of the Boys and Girls Republic

The Boys and Girls Republic of Farmington Hills, Michigan, came to life as the Boys Republic during the Progressive Era, when the combined stresses of urbanization, immigration, and poverty left an unprecedented number of children on the streets. It was a time marked both by social change and new thinking about the welfare of children, especially the neglected, delinquent, or abused. Here Gay Zieger tells the story of the remarkable humanitarians and reformers in the Detroit area who offered such children shelter, food, and comfort. Their efforts ultimately evolved into one of the most dramatic illustrations of a "junior republic"—an innovation directed not at enforcing discipline from above but rather at cultivating character among children through example and self-government.

We meet, for instance, the colorful first superintendent, Homer T. Lane, who believed in the innate goodness of children and established a self-governing system that allowed the boys in his care to exercise some power over their lives. While Lane dealt with issues concerning personal hygiene and honesty—and the book includes humorous accounts of how the boys arrived at "laws" addressing these matters—later issues included aggressive behavior, alienation, and drugs. Telling a story that spans the twentieth century, the author traces the social currents that gave rise to these problems, as well as the changing philosophies and psychological approaches aimed at resolving them. Her book pays tribute to the Republic, a residential treatment center for both boys and girls since 1994, by sharing the stories of individuals determined to help children discover their potential to succeed.

Gay Pitman Zieger is a professional writer who has contributed articles and essays to such journals as the Michigan History Magazine, Santa Fe Review, Labor History, and Moving Out: Feminist Literary and Arts Journal. She has written extensively on film, drama, and literary history for a variety of publications including Detroit’s The Metro Times and Philadelphia Inquirer.

Written in a lively, accessible style with lavish illustrations, Gay Zieger's For the Good of the Children is a most welcome addition to the literature on institutions for children-in this case the Ford Republic of Detroit. Zieger tells the story of the Ford Republic, an institution designed to rescue troubled young men, in a clear and compelling way. She understands both the institutional history of this important agency and the importance of the Ford Republic to the lives of the young men who lived there. A section of photographs and other illustrations adds a visual dimension which greatly aids the reader in understanding what the Ford Republic was and how it worked. This book will take its place alongside such other important works as LeRoy Ashby's Saving the Waifs and it will stand out from that group because of the author's clear and engaging style and her obvious empathy for the young people the Ford Republic served.

Overall, For the Good of the Children adds some rich historical detail to the literature on children's institutions in the United States, and potentially contributes to our understanding of the shifting ways in which ’problem’ young people have been conceptualized.

Gay Zieger has written an informative and very readable history of a notable children's institution. She writes extremely well, with clarity and imagination, and her narrative sweeps the reader along. Always attentive to historical context, she uses admirably a case study to probe wider social currents.

17 hours 54 min ago
Wayne State University Press is proud to announce our winner and finalists of the 2022 Next Generation Indie Book A… https://t.co/Ozy1WEQY1i
1 day 22 hours ago
Congratulations to all of the winners! https://t.co/Em8m5qoESk https://t.co/0EX9yD1vge
2 days 23 hours ago
RT @muckrack: Today's featured journalist is @fkwang, Communities Correspondent at @NewsHour. Based in Detroit, Frances covers As… https://t.co/XK9qCAOXhS