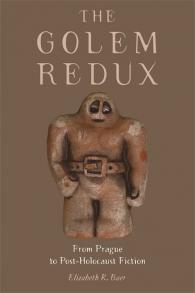 From Prague to Post-Holocaust Fiction

A wide-ranging study of the fascinating legend of the golem, especially as this humanoid morphs in contemporary Holocaust fiction.

First mentioned in the Book of Psalms in the Hebrew Bible, the golem is a character in an astonishing number of post-Holocaust Jewish-American novels and has served as inspiration for such varied figures as Mary Shelley’s monster in her novel Frankenstein, a frightening character in the television series The X-Files, and comic book figures such as Superman and the Hulk. In The Golem Redux: From Prague to Post-Holocaust Fiction, author Elizabeth R. Baer introduces readers to these varied representations of the golem and traces the history of the golem legend across modern pre- and post-Holocaust culture. In five chapters, The Golem Redux examines the different purposes for which the golem has been used in literature and what makes the golem the ultimate text and intertext for modern Jewish writers.

Baer begins by introducing several early manifestations of the golem legend, including texts from the third and fourth centuries and from the medieval period; Prague’s golem legend, which is attributed to the Maharal, Rabbi Judah Loew; the history of the Josefov, the Jewish ghetto in Prague, the site of the golem legend; and versions of the legend by Yudl Rosenberg and Chayim Bloch, which informed and influenced modern intertexts. In the chapters that follow, Baer traces the golem first in pre-Holocaust Austrian and German literature and film and later in post-Holocaust American literature and popular culture, arguing that the golem has been deployed very differently in these two contexts. Where prewar German and Austrian contexts used the golem as a signifier of Jewish otherness to underscore growing anti-Semitic cultural feelings, post-Holocaust American texts use the golem to depict the historical tragedy of the Holocaust and to imagine alternatives to it. In this section, Baer explores traditional retellings by Isaac Bashevis Singer and Elie Wiesel, the considerable legacy of the golem in comics, Michael Chabon’s The Amazing Adventures of Kavalier and Clay, and, finally, "Golems to the Rescue" in twentieth- and twenty-first-century works of film and literature, including those by Cynthia Ozick, Thane Rosenbaum, and Daniel Handler.

By placing the Holocaust at the center of her discussion, Baer illustrates how the golem works as a self-conscious intertextual character who affirms the value of imagination and story in Jewish tradition. Students and teachers of Jewish literature and cultural history, film studies, and graphic novels will appreciate Baer’s pioneering and thought-provoking volume.

Elizabeth R. Baer is professor of English and genocide studies at Gustavus Adolphus College in St. Peter, Minnesota. She is co-editor with Hester Baer of The Blessed Abyss: Inmate #6582 in Ravensbrück Concentration Camp for Women (Wayne State University Press, 2000) and co-editor with Myrna Goldenberg of Experience and Expression: Women, the Nazis, and the Holocaust (Wayne State University Press, 2003). She is also editor of Shadows on My Heart: The Civil War Diary of Lucy Buck of Virginia, a finalist for the Lincoln Prize in 1997.

Elizabeth Baer's The Golem Redux opens new vistas in our understanding of intertextuality and the enduring power of myth even, or especially, in the face of the Shoah. Her scholarship is comprehensive and richly suggestive."

– Alan R. Berger, Raddock Family Eminent Scholar Chair in Holocaust Studies and director of the Center for the Study of Values and Violence after Auschwitz at Florida Atlantic University

A wide-ranging study of the fascinating legend of the golem, especially as this humanoid morphs in contemporary Holocaust fiction."

Baer focuses on golem fiction that is realistic, except for the creation of the golem, and sees the role of the
golem in post-Holocaust literature as "an affirmation of the viability and authority of the imagination of story,
and of creativity." Scholarly without being pretentious, the book is highly recommended for all Jewish libraries.

The golem has returned. He fills the shelves of gift shops throughout Prague in the form of little clay statues. He inhabits the pages of recent comic books and novels. He appears on television shows and is written up in numerous newspaper and magazine articles. And he has been the subject of several scholarly studies in recent years. . . It is the most recent reappearance of the golem that interests Elizabeth R. Baer in The Golem Redux.

Demonstrating a lively sense of subject and a high degree of critical insight, Elizabeth Baer updates the centuries-old Jewish tradition of the golem and helps to clarify the continuing appeal of this strange-but-compelling figure to a range of writers, filmmakers, and other artists. Her book will be of particular interest to readers drawn to ponder the possibilities of imaginative literature after the Holocaust."

The Golem Redux is indispensible reading for anyone interested in the golem or any associated topics, and will likely remain so for some time.

Baer convincingly and cleverly argues that the golem, as a product of creativity itself that touches upon themes of memory and identity, is the perfect mechanism "to affirm the viability and authority of the imagination, of story, and creativity" in a post-Holocaust world.