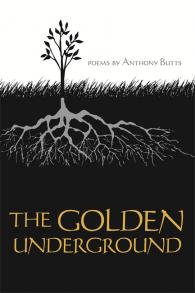 Butts, like Hayden before him, writes through a fretwork of symbols and allusions that challenge the reader toward deeper investigations of their own hidden wells.

The Golden Underground takes its title from a section of Wallace Stevens’s poem "Sunday Morning." Like "Sunday Morning," The Golden Underground offers a blend of the mythic and the religious as award-winning poet Anthony Butts records his search for meaning and understanding in everyday life. In this profound volume, Butts observes the relationships around him, including those of families and larger communities, to give a fittingly down-to-earth interpretation of the golden rule. The Golden Underground continues Butts’s tradition of presenting spiritual ideas to the forefront of American letters with classicism and complexity.

Butts’s roots as a native Detroiter are evident as a great number of poems take place in various Michigan locales, including metro Detroit, Kalamazoo, and Grand Rapids. A mythic section revolves around a recurring character known as the Lady of the Lake, with the particular lake being Lake Michigan. The religious portion of the book concerns itself with ancient Celtic spirituality, when the Irish were some of the foremost thinkers in the early Catholic Church. In fact, each poem in the final section of the book, "Pygmalion," was written after meditating at sung Taize services as the poet became involved with Celtic spirituality in the months following the September 11 tragedy. The Gospel According to John also finds its way into The Golden Underground in terms of the philosophy of good living found in each poem.

The Golden Underground is a book of peace, which continues Butts’s tradition of drawing seemingly disparate congregations of readers together in the enjoyment of verse. Fans of Butts’s previous work as well as general readers of poetry will enjoy this vital and insightful volume.

Anthony Butts is author of Fifth Season, Evolution, and Little Low Heaven, which was awarded the 2004 William Carlos Williams Award from the Poetry Society of America.

Taking the world around us and bringing it into a new light with strong classical influence, Butts will make readers think as they enjoy the verse with. The Golden Underground is well worth the read, highly recommended."

These poems are by turns enigmatic and magnetic. They pull you into a world that is at once familiar and strange. There is a classicism in many of the poems of The Golden Underground that is all the more unexpected because the subject matter-a child's thrill at the gift of a telescope, a casual moment outside a hospital-is the everyday jumble of experience."

– Geoffrey Jacques, author of Just for a Thrill: Poems<br />

In The Golden Underground, Anthony Butts unearths 'what we feel lying/ beneath surfaces but cannot reach.' Here, the Lady of the Lake, composed of water, traditionally able to reach deep into the earth through root and vine, and Saint Brigid, protector of all bodies of water, guide the poet from city to city, making their presence most known in Michigan, the Third Coast. It is in this realm of unfathomable depths and harsh industry that Butts uses his unusually keen powers of observation to probe the chthonic mystery of the seemingly mundane. In these psalms of 'surprise and anxiety' ultimately it is Woman, writ here in several manifestations: Goddess, Saint, black mother on a bus, who bridges the 'here' to 'there.' Butts, like Hayden before him, writes through a fretwork of symbols and allusions that challenge the reader toward deeper investigations of their own hidden wells."