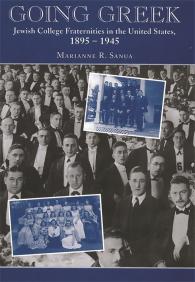 Going Greek offers an unprecedented look at the relationship between American Jewish students and fraternity life during its heyday in the first half of the twentieth century. More than secret social clubs, fraternities and sororities profoundly shaped the lives of members long after they left college—often dictating choices in marriage as well as business alliances. Widely viewed as a key to success, membership in these self-governing, sectarian organizations was desirable but not easily accessible, especially to non-Protestants and nonwhites. In Going Greek Marianne Sanua examines the founding of Jewish fraternities in light of such topics as antisemitism, the unique challenges faced by Jewish students on campuses across the United States, responses to World War II, and questions pertaining to assimilation and/or identity reinforcement.

Marianne R. Sanua is assistant professor in the Holocaust and Judaic Studies Program and the Department of History at Florida Atlantic University in Boca Raton, Florida.