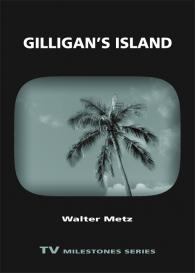 This work is one of the most interesting of the TV Milestones series: a quotidian object of analysis, turned to the light in the right kind of way, reveals itself to be full of splendor.

Gilligan’s Island, created by Sherwood Schwartz, aired for three seasons between 1964 and 1967 on the CBS network. While the series was typically dismissed for its episodic inanity, author Walter Metz argues that this characteristic is precisely the source of the show’s innovation as it produces a vibrant critique of dominant American values. In this analysis of Gilligan’s Island, Metz reveals the inner workings of American television and society through an intensive look at the popular sitcom.

In twenty-one short sections, Metz investigates many aspects of Gilligan’s Island: the narrative, the characters, the plot, and the performativity. Through multiple episode analyses and character examinations, Metz shows how the castaways’ actions on the island held deeper meaning and illustrated American social customs. The book also looks at several different themes presented in the show and connects them to many literary traditions, including Shakespeare (The Tempest and Hamlet), existential theatre (Waiting for Godot), and classic American literature (Moby-Dick). Through this discussion, Metz examines the literacy of Gilligan’s Island and the way it knowingly returns to certain tropes from high literature, masking their expression in a distinctly populist American idiom. Metz also addresses the legacy of Gilligan’s Island and its profound effect on American television, as evidenced by popular contemporary shows like Survivor and Lost.

At one point in time, Gilligan’s Island was the most syndicated show around the world, but few scholarly articles exist about it. Fans of the show and those interested in television history and popular culture will enjoy this playful and informative study that fills a gap in television history.

Walter Metz is chair and professor of the Department of Cinema and Photography at Southern Illinois University and is the author of Bewitched (Wayne State University Press, 2007) and Engaging Film Criticism: Film History and Contemporary American Cinema.

Once more, Walter Metz has provided a careful, intellectually satisfying take on a significant piece of artistic expression. This work is one of the most interesting of the TV Milestones series: a quotidian object of analysis, turned to the light in the right kind of way, reveals itself to be full of splendor."

– Robert Burgoyne, professor and chair of film studies at the University of St. Andrews

10 hours 13 min ago
In honor of the #CityofDetroit turning 321 years old on July 24th, WSUPress will be showcasing one Detroit Book of… https://t.co/PA7nONh4C0
15 hours 16 min ago
OUR FALL & WINTER 2022 TITLES ARE NOW AVAILABLE FOR PRE-ORDER! Grab your copy of any of our fall & winter titles f… https://t.co/qDykAsF9sk
2 days 16 hours ago
Happy Pub Date to THE SPOOK WHO SAT BY THE DOOR, SECOND EDITION! This new edition of a literary classic now includ… https://t.co/XrCsLZvf4D