Home » Books » Giambattista Basile's The Tale of Tales, or Entertainment for Little Ones 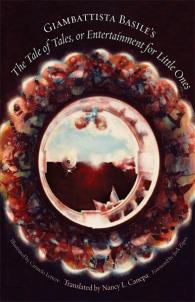 Giambattista Basile's The Tale of Tales, or Entertainment for Little Ones

Nancy Canepa's splendid new translation captures all the narrative energy and stylistic élan of The Tale of Tales and ensures that this collection will finally receive the attention it deserves.

The Tale of Tales, made up of forty-nine fairy tales within a fiftieth frame story, contains the earliest versions of celebrated stories like Rapunzel, All-Fur, Hansel and Gretel, The Goose That Laid the Golden Egg, Sleeping Beauty, and Cinderella. The tales are bawdy and irreverent but also tender and whimsical, acute in psychological characterization and encyclopedic in description. They are also evocative of marvelous worlds of fairy-tale unreality as well as of the everyday rituals of life in seventeenth-century Naples. Yet because the original is written in the nonstandard Neopolitan dialect of Italian—and was last translated fully into English in 1932—this important piece of Baroque literature has long been inaccessible to both the general public and most fairy-tale scholars.

The publication of The Tale of Tales marked not only a culmination of the interest in the popular culture and folk traditions of the Renaissance period but also the beginning of the era of the artful and sophisticated "authored" fairy tale that inspired and influenced later writers like Charles Perrault and the Brothers Grimm. Giambattista Basile’s "The Tale of Tales, or Entertainment for Little Ones" offers an excellent point of departure for reflection about what constitutes Italian culture, as well as for discussion of the relevance that forms of early modern culture like fairy tales still hold for us today. This volume is vital reading for fairy-tale scholars and anyone interested in cultural history.

Nancy L. Canepa is associate professor of French and Italian at Dartmouth College.

Nancy Canepa's translation of Basile's Lo cunto de li cunti will make a truly significant contribution to fairy-tale studies in the English-reading world. Her expertise makes her the one who could and should have undertaken the challenge of translating the whole collection. She has the translation skills and practice, the scholarly knowledge, disciplinary vision, and passionate interest that will ensure the success of this volume."

– Cristina Bacchilega, author of Postmodern Fairy Tales: Gender and Narrative Strategies, co-editor of <a href="http://wsupress.wayne.edu/books/245/Angela-Carter-and-the-Fairy-Tale">Angela Carter and the Fairy Tale</a>, and professor of English at the University of H

With stories marked by vertiginous fantasy, spirited wit, and baroque excess, Basile redefined the fairy tale for European audiences. Nancy Canepa's splendid new translation captures all the narrative energy and stylistic élan of The Tale of Tales and ensures that this collection will finally receive the attention it deserves."

– Maria Tatar, John L. Loeb Professor of Germanic Languages and Literatures at Harvard University and author of The Hard Facts of the Grimms’ Fairy Tales and Off With Their Heads!

Canepa's edition, with its newly-commissioned pen-and-ink illustrations, seems to be aimed at general readers. Basile's Tale of Tales constitutes a crossroads in this landscape, and Canepa has provided a valuable service by making it available again in English."