Home » Books » From the Ghetto to the Melting Pot 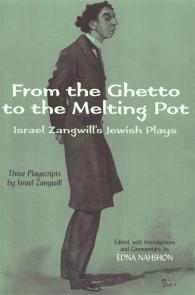 From the Ghetto to the Melting Pot

Edited, with Introductions and Commentary, by Edna Nahshon

From the Ghetto to the Melting Pot is a major contribution to the field of Jewish cultural history.

In his historic play The Melting Pot, Israel Zangwill (1864–1926) introduced into our discourse a potent metaphor that for nearly a hundred years has served as a key definition of the United States. The play, enthusiastically espoused by President Theodore Roosevelt, to whom it was dedicated, offered a grand vision of America as a dynamic process of ethnic and racial amalgamation. By his own admission, The Melting Pot grew out of Zangwill’s intense involvement in issues of Jewish immigration and resettlement and was grounded in his interpretation of Jewish history.

Zangwill, Anglo Jewry’s most renowned writer, began writing seriously for the stage in the late 1890s. At the time, the negative stereotype of the so-called Stage Jew was still deeply entrenched in the theatrical mainstream, so much so that Jewish playwrights writing for the English-language stage avoided altogether the portrayal of Jewish life. Zangwill shattered this silence in 1899 with the American premiere of Children of the Ghetto—his first full-length drama, and the first English-language play devoted in its entirety to the depiction of Jewish life in an authentic and positive fashion. The play’s groundbreaking production drew tremendous attention and generated heated debates, but since the script was never published, the memory of the passions it generated dimmed, and its whereabouts eventually became unknown. After more than a century, theater historian Edna Nahshon has discovered the original manuscript of this milestone text, as well as that of another unpublished Zangwill play, The King of Schnorrers, and the original version of The Melting Pot. Nahshon brings these three works together in print for the first time in From the Ghetto to the Melting Pot.

Edna Nahshon’s in-depth introduction to this volume includes a biography of Israel Zangwill that especially pertains to these works and situates them within the Anglo-American theater of the time. The essays preceding each play provide rich and hitherto unknown information on the scripts, their stage productions, and their popular and critical reception. While some issues addressed in From the Ghetto to the Melting Pot are uniquely Jewish, others are universal and typical of the negotiation of self-presentation by ethnic and minority groups, particularly within the American experience.

Edna Nahshon is associate professor of Hebrew at the Jewish Theological Seminary of America. She has written extensively on Jewish theater and is the author of Yiddish Proletarian Theatre: The Art and Politics of the Artef, 1925–1940 (Greenwood, 1998).

By bringing together into a single volume three plays by Israel Zangwill-dramatist, novelist, and global Jewish activist-with several finely researched and written introductions, Edna Nahshon has provided a valuable service. The plays themselves as well as the accompanying explanatory material go far in deepening our understanding of the world of Jewish theatrical production."

Edna Nahshon, through brilliant detective work, has unearthed Israel Zangwill's long-lost Jewish plays; in editing them, she has illuminated Zangwill's life and work. Rich in scholarly insight and grounded in a deep understanding of turn-of-the-century theater, From the Ghetto to the Melting Pot is a major contribution to the field of Jewish cultural history."

– James Shapiro, Columbia University, author of Shakespeare and the Jews

With marvelous clarity Nahshon has provided the reader with a fresh understanding of this independent and important voice who roused both controversy and admiration on both sides of the Atlantic as the interpreter of Jewish life."

Israel Zangwill was the most important Jewish writer in the English-speaking world in the early twentieth century. Edna Nahshon is to be congratulated for locating and publishing the scripts of his well-known but hitherto little-read Jewish plays. Her introduction to his life and each of the plays carefully contextualizes their composition, production, and reception, both in the United States and Great Britain."

Only someone with the erudition and passion of Edna Nahshon could have unearthed plays by Zangwill believed to have been lost. A splendid theater scholar and vivid writer, Nahshon delivers not only the plays, but also everything you could possibly want to know about them, how they were produced and received, their historical importance, and why they continue to be fascinating today. A major contribution."

Thanks to Edna Nahshon, a Tel Aviv-born professor of Hebrew at the Jewish Theological Seminary, Zangwill's most important works for the theater will now find a new audience. As the new volume of his plays amply demonstrates, he was also far ahead of his time in his dramatization of the very kinds of issues that preoccupy us today-conflict between those of the same ethnicity or nationality but different religious views, marriage between those of different origins and the need to grant humanity to the most vulnerable on our midst. Nahshon does a great service in helping to keep his legacy alive."

Zangwill's work played a crucial role in the remaking of both British and American attitudes not only toward Jews but toward immigrants and hence toward the social and national project of each country. . . . This volume [is] an essential tool for the burgeoning analysis of the relation of Jews to the literature and culture of this period."

Nahshon's proficient style of expression communicates a staggering amount and variety of information in an enjoyable manner. It's difficult to imagine a more readable scholarly tome of these dimensions."

19 hours 3 min ago
Hey #movementdetroit fans! WSUPress's TECHNO REBELS is a great way to relive the excitement of @MovementDetroit all… https://t.co/f4nPn8uYj0
1 day 19 hours ago
Check out Cindy Hunter Morgan's new book at https://t.co/o1mzeoKv1M https://t.co/6W9FLg0RLa
2 days 22 hours ago
Wayne State University President M. Roy Wilson with his teacher in high school. Check out this image and many more… https://t.co/W3kp1D7dFX