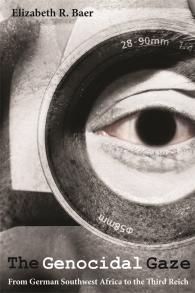 From German Southwest Africa to the Third Reich

The first genocide of the twentieth century, though not well known, was committed by Germans between 1904–1907 in the country we know today as Namibia, where they exterminated thousands of Herero and Nama people and subjected the surviving indigenous men, women, and children to forced labor. The perception of Africans as subhuman—lacking any kind of civilization, history, or meaningful religion—and the resulting justification for the violence against them is what author Elizabeth R. Baer refers to as the "genocidal gaze," an attitude that was later perpetuated by the Nazis. In The Genocidal Gaze: From German Southwest Africa to the Third Reich, Baer uses the trope of the gaze to trace linkages between the genocide of the Herero and Nama and that of the victims of the Holocaust. Significantly, Baer also considers the African gaze of resistance returned by the indigenous people and their leaders upon the German imperialists.

Baer explores the threads of shared ideology in the Herero and Nama genocide and the Holocaust—concepts such as racial hierarchies, lebensraum (living space), rassenschande (racial shame), and endlösung (final solution) that were deployed by German authorities in 1904 and again in the 1930s and 1940s to justify genocide. She also notes the use of shared methodology—concentration camps, death camps, intentional starvation, rape, indiscriminate killing of women and children—in both instances.

While previous scholars have made these links between the Herero and Nama genocide and that of the Holocaust, Baer’s book is the first to examine literary texts that demonstrate this connection. Texts under consideration include the archive of Nama revolutionary Hendrik Witbooi; a colonial novel by German Gustav Frenssen (1906), in which the genocidal gaze conveyed an acceptance of racial annihilation; and three post-Holocaust texts—by German Uwe Timm, Ghanaian Ama Ata Aidoo, and installation artist William Kentridge of South Africa—that critique the genocidal gaze. Baer posits that writing and reading about the gaze is an act of mediation, a power dynamic that calls those who commit genocide to account for their crimes and discloses their malignant convictions. Careful reading of texts and attention to the narrative deployment of the genocidal gaze—or the resistance to it—establishes discursive similarities in books written both during colonialism and in the post-Holocaust era.

The Genocidal Gaze is an original and challenging discussion of such contemporary issues as colonial practices, the Nazi concentration camp state, European and African race relations, definitions of genocide, and postcolonial theory. Moreover, Baer demonstrates the power of literary and artistic works to condone, or even promote, genocide or to soundly condemn it. Her transnational analysis provides the groundwork for future studies of links between imperialism and genocide, links among genocides, and the devastating impact of the genocidal gaze.

Elizabeth R. Baer served as the Ida E. King Distinguished Visiting Scholar in Holocaust studies at Stockton University in New Jersey in 2016–2017. She continues as research professor of English and African studies at Gustavus Adolphus College in Minnesota. She is the editor or author of four books, including The Golem Redux: From Prague to Post-Holocaust Fiction (Wayne State University Press, 2012).

In 2015, Germany finally acknowledged the genocide committed between 1904 and 1908 in its South West African colony. This timely book offers astute insights into the mentality and mindset willing to exterminate others beyond the colonial era.

Important and timely. Baer argues that racial branding provides the focus for a pervasive `genocidal gaze’ that is traced through texts and art. Dissecting discourses exposes important similarities between the ways in which the colonial genocide experienced in Namibia and the Holocaust were framed, despite their separation through time and space.

A cultural history of the gaze in one of its most violent manifestations, The Genocidal Gaze uses both Frantz Fanon’s and Laura Mulvey’s dissections of the power to look in order to reconstruct the arc of what will ultimately produce the first genocide of the 20th Century in today’s Namibia. By mobilizing archival documents, literary and popular novels, art works and poems, Elizabeth Baer has produced an essential book, a necessary reading and a path breaking piece of scholarship.

The Genocidal Gaze is a brilliant contribution to genocide studies and post-colonial studies scholarship. It is particularly valuable because of the literary analysis and because of the original and creative commentary that Dr. Baer provides about the historical events in German Southwest Africa at the beginning of the twentieth century and the links she develops with the racist ideology of Hitler and the Nazis.

Baer’s concept of ‘imaginability’ (the colonial genocide made the Holocaust imaginable) proves especially effective in arguing the continuity between 1904 and the 1940s. Baer skillfully supports this notion by the racializing scientific, cultural, and theoretic discourse of the era. With a deep historical perspective, Baer also considers pre-colonial views of Africans and ideological conditions at the time Germany established colonies.

The Genocidal Gaze offers a thoughtful interpretation of a select number of literary and artistic works that link German colonialism to the Holocaust. It will likely inspire scholars in a range of fields to continue making their own connections.

Baer examines the chilling methods that decimated the Herero and Nama people in the early 20th century — and how they were used against the Jews.

Of particular note are Baer's efforts to surface resistant readings past and present and her reflection on the forms of erasure that have prevented Germans from coming to terms with its colonial history and genocidal acts in Africa.