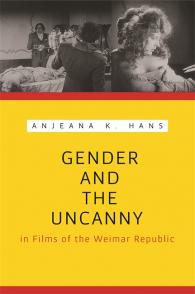 Gender and the Uncanny in Films of the Weimar Republic

The Weimar period in Germany was a time of radical change, when the traditions and social hierarchies of Imperial Germany crumbled, and a young, deeply conflicted republic emerged. Modernity brought changes that reached deep into the most personal aspects of life, including a loosening of gender roles that opened up new freedoms and opportunities to women. The screen vamps, garçonnes, and New Women in this movie-hungry society came to embody the new image of womanhood: sexually liberated, independent, and—at least to some—deeply threatening. In Gender and the Uncanny in Films of the Weimar Republic, author Anjeana K. Hans examines largely forgotten films of Weimar cinema through the lens of their historical moment, contemporary concerns and critiques, and modern film theory to give a nuanced understanding of their significance and their complex interplay between gender, subjectivity, and cinema.

Hans focuses on so-called uncanny films, in which terror lies just under the surface and the emancipated female body becomes the embodiment of a threat repressed. In six chapters she provides a detailed analysis of each film and traces how filmmakers simultaneously celebrate and punish the transgressive women that populate them. Films discussed include The Eyes of the Mummy (Die Augen der Mumie Mâ, Ernst Lubitsch, 1918), Uncanny Tales (Unheimliche Geschichten, Richard Oswald, 1919), Warning Shadows (Schatten: Eine nächtliche Halluzination, Artur Robison, 1923), The Hands of Orlac (Orlacs Hände, Robert Wiene, 1924), A Daughter of Destiny (Alraune, Henrik Galeen,1928), and Daughter of Evil (Alraune, Richard Oswald, 1930). An introduction contextualizes Weimar cinema within its unique and volatile social setting.

Hans demonstrates that Weimar Germany’s conflicting emotions, hopes, and fears played out in that most modern of media, the cinema. Scholars of film and German history will appreciate the intriguing study of Gender and the Uncanny in Films of the Weimar Republic.

Anjeana K. Hans is assistant professor of German at Wellesley College. Her teaching and research focuses on German literature, film, and culture of the early twentieth century, and she is interested in questions of gender, subjectivity, and identity.

In a series of tightly interconnected close readings of ‘uncanny’ narratives of ‘transgressive feminity’ in Weimar cinema, Anjeana K. Hans demonstrates how films from the period negotiate the changing gender dynamics after the First World War and how they engage in a self-examination of the changing function of cinema itself. Theoretically sophisticated and elegantly written, this engaging study brilliantly succeeds in unearthing the manifold ways—complex and often contradictory—in which Weimar-era genre films that centered on fantasies of (female) empowerment and (potential) punishment appealed to diverse audiences, male and female alike.

– Christian Rogowski, G. Armour Craig Professor in Language and Literature In the Department of German, Amherst College, editor of The Many Faces of Weimar Cinema

A seminal work of original research and cinematic scholarship, Gender and the Uncanny in Films of the Weimar Republic by Anjeana K. Hans is a unique contribution that should be considered a critically important addition to academic library 20th Century German Popular Culture and 20th Century Cinematic Studies reference collections and supplemental studies reading lists.

Anjeana K. Hans admirably continues the important work of rethinking Weimar cinema, which has long been overshadowed by the catastrophe of the Third Reich. Starting with the trauma of WWI, Hans argues convincingly that uncanny films populated with unruly women offered a fundamental and revolutionary visual language that fascinated the audiences of the Weimar Republic and beyond. These images gave German cinema its golden age.

– Randall Halle, Klaus W. Jonas Professor of German Film and Cultural Studies at the University of Pittsburgh and author of The Europeanization of Cinema: Interzones and Imaginative Communities and German Film after Germany: Toward a Transnational Aesthetic

A key contribution of the book is Hans's focus on the less-known genre films of well-known directors, including Ernst Lubitsch, Richard Oswald, and Robert Wiene—film that are unfortunately mostly unavailable outside the archive.

4 hours 19 min ago
HAPPY PUB DATE! Dan Gerber said "If you make yourself available to Cindy Hunter Morgan’s poems, they will revivif… https://t.co/L60dTqsUUj
1 day 18 min ago
Grab your copy or e-book of @fkwang's YOU CANNOT RESIST ME WHEN MY HAIR IS IN BRAIDS today! https://t.co/htFDjNa9yj https://t.co/zHyt049441
4 days 2 hours ago
Wayne State University Press is proud to announce our winner and finalists of the 2022 Next Generation Indie Book A… https://t.co/Ozy1WEQY1i