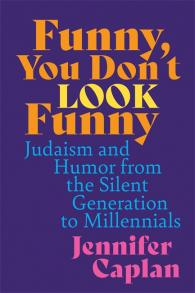 Judaism and Humor from the Silent Generation to Millennials

In this comprehensive approach to Jewish humor focused on the relationship between humor and American Jewish practice, Jennifer Caplan calls us to adopt a more expansive view of what it means to "do Jewish," revealing that American Jews have turned, and continue to turn, to humor as a cultural touchstone. Caplan frames the book around four generations of Jewish Americans from the Silent Generation to Millennials, highlighting a shift from the utilization of Jewish-specific markers to American-specific markers.

Jewish humor operates as a system of meaning-making for many Jewish Americans. By mapping humor onto both the generational identity of those making it and the use of Judaism within it, new insights about the development of American Judaism emerge. Caplan’s explication is innovative and insightful, engaging with scholarly discourse across Jewish studies and Jewish American history; it includes the work of Joseph Heller, Larry David, Woody Allen, Seinfeld, the Coen brothers films, and Broad City. This example of well-informed scholarship begins with an explanation of what makes Jewish humor Jewish and why Jewish humor is such a visible phenomenon. Offering ample evidence and examples along the way, Caplan guides readers through a series of phenomenological and ideological changes across generations, concluding with commentary regarding the potential influences on Jewish humor of later Millennials, Gen Z, and beyond.

Jennifer Caplan is the Jewish Foundation of Cincinnati Chair in Judaic Studies at the University of Cincinnati. She is the author of numerous works on Judaism and popular culture, including publications in Bulletin for the Study of Religion, Journal of Modern Jewish Studies, Shofar, and the Journal of Jewish Identities.

Unlike most books on Jewish humor, Caplan’s innovative work explores the place of Judaism within humor itself, allowing Caplan to stay laser-focused on her topic. The reader will be enlightened and entertained as she tracks the evolution of this poorly understood facet of American comedy across four generations.

– Jarrod Tanny, author of City of Rogues and Schnorrers: Russia’s Jews and the Myth of Old Odessa

You have undoubtedly heard that Jews are funny and, after all, so many iconic Jewish comedian writers are famous for their biting humor, right? Rather than take that sweeping assertion for granted, Jennifer Caplan writes insightfully about the story behind their stories through several generations of literary and film humor by iconic Jews who ‘made it’ in America. Her profound revelation is that humor as an intellectual and social frame for paradox offers a critical expression of generational difference in views of the role of Judaism in American culture. Her book is a provocative cultural history and at the same time a clarion call for future generations of a people connected to the joke as well as the book.

Funny, You Don’t Look Funny is a terrific volume, anchored by Jennifer Caplan’s sharp, innovative readings of American Jewish comedic work from the late twentieth century through the turn of the millennium. Training her lens on how these comics took on the Jewish religion, Caplan reveals that the comedic process has long been a vital form of religious interpretation for American Jews.

2 days 4 min ago
Now a National Jewish Book Award Finalist! @JewishBook https://t.co/qTKAeUEPVX
2 days 3 hours ago
RT @Steph_Steinberg: Tomorrow @ 7 p.m.! Join me and @DETWritingRoom at The Whitney for our first #2023AuthorSeries event ft. @waynestate… https://t.co/pssbi2NLNs
6 days 4 hours ago
SAVE THE DATE! Join author Desiree Cooper and illustrator Bec Sloane this Saturday for a behind the scenes look at… https://t.co/cKDBmbewOa