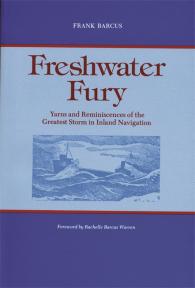 Yarns and Reminiscences of the Greatest Storm in Inland Navigation

The reading of Freshwater Fury is exciting and holds our interest until the saga is complete…an exciting human drama.

Up and down the Great Lakes, wherever captains and seamen met, one of the chief topics of conversation is still the Great Storm—the worst disaster in Great Lakes history. By men of the Lakes, November 9, 1913 will always be remembered as Black Sunday, for it brought death to hundreds of their companions and destruction to scores of ships of the Lakes fleet. Each man who survived the Storm has a fascinating story to tell.

Freshwater Fury is the first comprehensive history of the Great Storm. Author Frank Barcus, who has met and talked with many survivors during his trips on Lakes freighters over the past twenty years, presents here their vivid eye-witness accounts. The many drawings, maps, and diagrams executed by the author add pictorial interest to the story of this dramatic struggle between men and the elements.

Frank Barcus was born in 1895 in Milwaukee, Wisconsin, within sight of Lake Michigan. In 1898 he moved to Detroit, where he learned to love boats. "As a boy," he says, "I practically lived in a twenty-foot canoe and paddled on all the Great Lakes and their tributaries." Later he rode the long ships on
more than two hundred trips to all Lakes ports.

Mr. Barcus is a registered architect, a member of the American Institute of Architects and a charter member of the Engineering Society of Detroit. He studied at the University of Michigan, the Beaux Arts Architectural Society of New York, and the Chicago Art Institute. For twenty years he was associated as a designer with Albert Kahn.
He was also a Supervising Architect for the Soviet Government, 1930-1931. At present he is on the staff of the Detroit City Plan Commission.

For many years, Mr. Barcus has
contributed to various historical, civic, and planning journals, and to Michigan Artists Exhibitions and art galleries.

The reading of Freshwater Fury is exciting and holds our interest until the saga is complete . . . an exciting human drama. Mr Barcus' drawings of scenes of the storm add a touch often lacking with such events, which obviously have no photographic record.

3 hours 37 sec ago
Happy Pub Date to THE SPOOK WHO SAT BY THE DOOR, SECOND EDITION! This new edition of a literary classic now includ… https://t.co/XrCsLZvf4D
3 hours 4 min ago
RT @DarkProjections: Returned from a great two weeks in Europe to find copies of my new book! Kolchak:The Night Stalker, one of the Pion… https://t.co/kPJ5kKLRyr
1 day 25 sec ago
RT @oneitadetroit: Thrilled that @WSUPress is releasing the 2E of Sam Greenlee's "The Spook Who Sat by the Door" tomorrow. Introductio… https://t.co/hZpAjxluIl