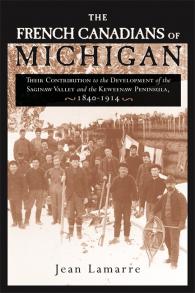 The French Canadians of Michigan

Their Contribution to the Development of the Saginaw Valley and the Keweenaw Peninsula, 1840-1914

Most information regarding the French Canadians in Michigan concerns those who settled during the French period. However, another significant migration occurred during the industrial period of the nineteenth century, when many French Canadians settled in the Saginaw Valley and on the Keweenaw Peninsula—two regions characteristic of Michigan’s economic development in the nineteenth century. The lumber industry of the Saginaw Valley and the copper mines of the Keweenaw Peninsula provided very different challenges to French Canadian settlers as they tried to find ways to adapt to changing environments and industrial realities.

Jean Lamarre is Associate Professor of History at the Royal Military College of Canada.

Jean Lamarre has demonstrated that French-Canadian migration was not only a New England phenomenon. Lamarre's study makes a fine addition to the literature in immigration history and, specifically, to the scholarship on the peopling of the Great Lakes region. Local historians, too, will find it a useful addition to their libraries.

Jean Lamarre's book, The French Canadians of Michigan is a welcome addition to the current revival in statewide ethnic studies. As the trend toward in-depth immigration analysis continues. Michigan readers can now go beyond the traditional anecdotal volumes or short perfunctory sources that in the past characterized the histories of Michigan's newcomers. Lamarre's book remains a thoroughly researched and valuable contribution to French-Canadian cultural, socioeconomic, and migration history.

Overall, the author does a good job of documenting a neglected aspect of the French Canadian migration experience in a rather limited space."

18 hours 45 min ago
Wayne State University Press is proud to announce our winner and finalists of the 2022 Next Generation Indie Book A… https://t.co/Ozy1WEQY1i
1 day 23 hours ago
Congratulations to all of the winners! https://t.co/Em8m5qoESk https://t.co/0EX9yD1vge
2 days 23 hours ago
RT @muckrack: Today's featured journalist is @fkwang, Communities Correspondent at @NewsHour. Based in Detroit, Frances covers As… https://t.co/XK9qCAOXhS