Home » Books » The Forgotten Iron King of the Great Lakes 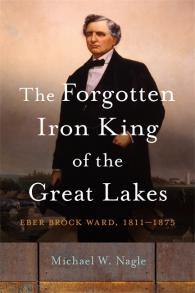 The Forgotten Iron King of the Great Lakes

Eber Brock Ward (1811–1875) began his career as a cabin boy on his uncle’s sailing vessels, but when he died in 1875, he was the wealthiest man in Michigan. His business activities were vast and innovative. Ward was engaged in the steamboat, railroad, lumber, mining, and iron and steel industries. In 1864, his facility near Detroit became the first in the nation to produce steel using the more efficient Bessemer method. Michael W. Nagle demonstrates how much of Ward’s success was due to his ability to vertically integrate his business operations, which were undertaken decades before other more famous moguls, such as Andrew Carnegie and John D. Rockefeller. And yet, despite his countless successes, Ward’s life was filled with ruthless competition, labor conflict, familial dispute, and scandal. Nagle makes extensive use of Ward’s correspondence, business records, contemporary newspaper accounts, and other archival material to craft a balanced profile of this fascinating figure whose actions influenced the history and culture of the Great Lakes and beyond.

Michael W. Nagle is a professor of history and political science at West Shore Community College in Scottville, Michigan. He is the author of Justus S. Stearns: Michigan Pine King and Kentucky Coal Baron, 1845–1933 (Wayne State University Press, 2015), which won the Kentucky History Award. He lives in Ludington, Michigan.

This is a book that Great Lakes history has long needed. Eber Brock Ward was a major figure in the development of the Midwest region and a pioneer in the fields of transportation and industry. Michael Nagle’s finely researched and written book plugs a large gap in the history of the inland seas.

Michael Nagle graces us with an illuminating biography of Eber Brock Ward, a business titan of Michigan’s nineteenth century. Nagle brings complexity and nuance to the life of this influential and, some would say, nefarious public figure who lived an equally intriguing private life.

In writing this biography, Michael Nagle leveraged the ambitious life of industrialist Eber Brock Ward to craft a comprehensive bridge between antebellum America and the roots of the Gilded Age. Nagle weaves the compelling threads of E. B. Ward’s story together for the first time in this finely researched Great Lakes saga.

All who complete graduate work in the study of history and aspire to write published works know the expectation that the author exhaust the sources of the topic. Professor Mike Nagle is tireless in his quest for knowing and exemplifies this ultimate standard. It is surprising that no other historian has been aware of and motivated to write a biography of Eber Brock Ward, a major manufacturing leader in Michigan’s history. Mike Nagle is adept at telling this intriguing and revealing story of an interesting character.

One would think that these outlandish tales would make Eber Brock Ward and his role in pushing Michigan from an extractive economy into the Industrial Age unforgettable. But that’s not how it went. Author Michael W. Nagle shows how Ward fell into oblivion despite scandals and exploits that would make him Twitter-famous today. One bizarre tale follows another as he hops from shipping to mining to manufacturing to becoming Michigan’s richest man. As this bad-boy Horatio Alger raised his personal fortune, he also raised eyebrows and hackles. Ward may not have been remembered, but people who read Nagle’s book will never forget him.