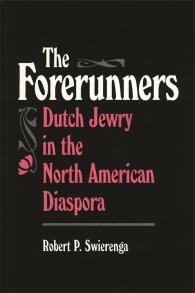 Between 1800 and 1880 approximately 6500 Dutch Jews immigrated to the United States to join the hundreds who had come during the colonial era. Although they numbered less than one-tenth of all Dutch immigrants and were a mere fraction of all Jews in America, the Dutch Jews helped build American Jewry and did so with a nationalistic flair. Like the other Dutch immigrant group, the Jews demonstrated the salience of national identity and the strong forces of ethnic, religious, and cultural institutions. They immigrated in family migration chains, brought special job skills and religious traditions, and founded at least three ethnic synagogues led by Dutch rabbis.

The Forerunners offers the first detailed history of the immigration of Dutch Jews to the United States and to the whole American diaspora. Robert Swierenga describes the life of Jews in Holland during the Napoleonic era and examines the factors that caused them to emigrate, first to the major eastern seaboard cities of the United States, then to the frontier cities of the Midwest, and finally to San Francisco. He provides a detailed look at life among the Dutch Jews in Boston, New York, Philadelphia, Baltimore, and New Orleans. This is a significant volume for readers interested in Jewish history, religious history, and comparative studies of religious declension. Immigrant and social historians likewise will be interested in this look at a religious minority group that was forced to change in the American environment.

Robert P. Swierenga is a professor of history at Kent State University. He received his Ph.D. from the University of Iowa.