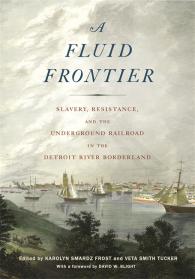 Slavery, Resistance, and the Underground Railroad in the Detroit River Borderland

Edited by Karolyn Smardz Frost and Veta Smith Tucker
With a foreword by David W. Blight

As the major gateway into British North America for travelers on the Underground Railroad, the U.S./Canadian border along the Detroit River was a boundary that determined whether thousands of enslaved people of African descent could reach a place of freedom and opportunity. In A Fluid Frontier: Slavery, Resistance, and the Underground Railroad in the Detroit River Borderland, editors Karolyn Smardz Frost and Veta Smith Tucker explore the experiences of the area’s freedom-seekers and advocates, both black and white, against the backdrop of the social forces—legal, political, social, religious, and economic—that shaped the meaning of race and management of slavery on both sides of the river.

In five parts, contributors trace the beginnings of and necessity for transnational abolitionist activism in this unique borderland, and the legal and political pressures, coupled with African Americans’ irrepressible quest for freedom, that led to the growth of the Underground Railroad. A Fluid Frontier details the founding of African Canadian settlements in the Detroit River region in the first decades of the nineteenth century with a focus on the strong and enduring bonds of family, faith, and resistance that formed between communities in Michigan and what is now Ontario. New scholarship offers unique insight into the early history of slavery and resistance in the region and describes individual journeys: the perilous crossing into Canada of sixteen-year-old Caroline Quarlls, who was enslaved by her own aunt and uncle; the escape of the Crosswhite family, who eluded slave catchers in Marshall, Michigan, with the help of others in the town; and the international crisis sparked by the escape of Lucie and Thornton Blackburn and others.

With a foreword by David W. Blight, A Fluid Frontier is a truly bi-national collection, with contributors and editors evenly split between specialists in Canadian and American history, representing both community and academic historians. Scholars of the Underground Railroad as well as those in borderland studies will appreciate the interdisciplinary mix and unique contributions of this volume.

Veta Smith Tucker is a literary and public historian and an educator. She taught African American literature and African American Studies at Grand Valley State University in Allendale, Michigan for two decades and launched the Kutsche Office of Local History at the university in 2009. Her major published works include articles on enslaved black women, on forgotten nineteenth-century African American author Julia Collins, on historical fiction by contemporary African American women, and A Twenty-First Century History of the 1847 Kentucky Raid in Cass County, Michigan (2010).

Karolyn Smardz Frost is an archaeologist, historian, educator, and author specializing in African American/Canadian transnationalism. She is Senior Research Fellow for the Harriet Tubman Institute, York University, Toronto, and a Harrison McCain Visiting Professor at Nova Scotia’s Acadia University. Her biography of fugitive slaves Thornton and Lucie Blackburn, I’ve Got a Home in Glory Land: A Lost Tale of the Underground Railroad, won the Governor General’s Award for Non-Fiction, Canada’s highest literary honor. Her forthcoming volume is Steal Away Home: Letters to a Fugitive Slave.

This groundbreaking edited collection is as complex as it is riveting. In A Fluid Frontier, Canadian and American scholars collaborate to create a full-spectrum picture of the Detroit River region during the pivotal era of the Underground Railroad. These chapters take an unflinching look at the realities of slavery and racial prejudice on both sides of the US-Canadian border as well as at the brave, resilient, imperfect people who fought against that inhumane system, and whose descendants still span the borderland today.

A Fluid Frontier is both a good read and an essential reference. It goes well beyond a useful assemblage of recent scholarship by Canadian and American, academic and community historians. Editors Karolyn Smardz Frost and Veta Smith Tucker have created a context of Black agency and the transnational community created on the Detroit River borderland that will inform and spur research for years to come. They and the other contributors challenge popular conceptions of the Underground Railroad by offering well-documented histories of self-liberating freedom-seekers and those who aided them, as well as of the Black community that spanned the river, creating churches, schools, and a movement to ensure the lasting freedom of Black people, whether free born or fugitives from slavery.

Comprised of thirteen erudite, informed and informative contributions, A Fluid Frontier: Slavery, Resistance, and the Underground Railroad in the Detroit River Borderland is an impressive work of seminal scholarship and a very highly valued addition to academic library American History and 19th Century Black History collections. While of enduring value for academia, A Fluid Frontier will also prove to be of exceptional interest to the non-specialist general reader with respect to the history of the 18th Century abolitionist movement in general, and the famed 'underground railroad' in particular.

[. . .] a thought-provoking work [. . .] that hightlight[s] various aspects of the Underground Railroad in communities along the Detroit River Borderland.

In this beautifully illustrated, deeply researched book, we recognize parallels with Detroit’s contemporary movements for water rights, urban agriculture, eviction defense and freedom schools.
It’s stunning to discover that one common element in virtually every 19th century activist’s biographical sketch presented in this volume concerns either setting up independent schools for freedom-seekers, fighting to desegregate public schools, or both!

Karolyn Smardz Frost and Veta Smith Tucker, editors of A Fluid Frontier: Slavery, Resistance, and the Underground Railroad in the Detroit River Borderland, have compiled a collection of essays that demonstrate the significance of the Detroit River region in the history of the Underground Railroad, black transnational activism, and borderlands histories that are exciting, useful, and generative.

In the steady stream of new publications about the Underground Railroad, every now and then one arrives that is particularly worthy of note. A Fluid Frontier stakes its claim to scholarly and public attention in taking up the important and somewhat-neglected question of the U.S.-Canadian border, focusing on one of its most significant stretches in the Detroit River region. Its thirteen papers are worthy scholarship that adds measurably to our knowledge of the Underground Railroad, antislavery activities, and African American communities, as do the introductory and concluding essays by the editors, and the brief forward by David W. Blight.