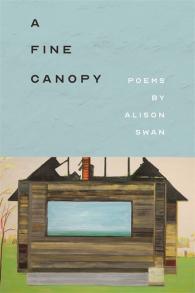 Save 40% when you use coupon code APR1 at checkout!

These poems thrive beneath a canopy of nuanced connections with crows, stars, leaves, lakes, a lover, a daughter, and most potently, a self. Swan offers us poems of faith and resilience that arise from her deep, sustained perception of a natural world where ‘everything gives back light.’

– Diane Seuss, author of Four-Legged Girl and Still Life with Two Dead Peacocks and a Girl

Thank all the muses that these beautiful poems by Alison Swan arrive to help us take notice of our own fragility and that of our world. Not oblivious to sorrow, far from it, but so raptly involved in all that constitutes the ground beneath our feet and the canopy above us as to give us heart. This book is truly restorative reading.

It makes sense that a terrain as extraordinary as the Great Lakes would find voice in a poet as glorious as Alison Swan. I am smitten. Swan writes with bone-deep passion, astonishing clarity, and watchful tending about life ‘at the edge of a freshwater sea.’ This collection is an almanac, a chronicle, a sacrificial offering to a particular landscape, and also a paean to all beings. The poems fly about with lives of their own, breathing inside their skins, beautiful and endangered.

– Janisse Ray, author of Ecology of a Cracker Childhood and A House of Branches: Poems

These poems offer us acts of attention and tenderness, two things we need now more than ever.

– Mary Ruefle, Vermont poet laureate and finalist for the 2020 Pulitzer Prize for poetry

In this investigative, thoughtful debut, Swan carefully constructs an arc of grief and transformation through a wide range of poetic forms, including lyric strophes, tercets, couplets, and luminous fragments. The poems are unified by a recurring interest in the relationship between interior and exterior, and the porous boundary between the self and the world. As the book unfolds, the "red-winged blackbirds," "train whistles," and "passerines" that surround the speaker are subtly transformed by her wild flights of imagination. The speaker observes in "Succession," "Wildflowers/ replenishing a charred mountainside/ offer answers, ways of seeing and being/ that affirm silver linings: the fuchsia-blue/ flare of fireweed and the promise of cones." This poem reads as an exploration and interrogation of the way the author’s mind projects onto external objects, and the myriad ways the world may be changed by the observer’s psyche. "What sort of life inures one to the relief/ of knowing things we cannot see," Swan asks. Teasing out possible answers to these questions, Swan offers a subtle consideration on the natural world through accomplished poetic craft.

Each poem is as unique as nature itself.

If you’re looking for some ecologically-minded poetry, look no further than the latest from Midwest writer Alison Swan. Known for her intricate environmental writing and observational prowess, Swan’s new collection joins the new literary canon of work that engages with climate change as a ubiquitous reality, not just a far-off doomsday. The word solastalgia can fairly describe this genre of art: loving and grieving one’s world simultaneously, whether explicitly or unconsciously. Swan’s poems are wise and artful, and this collection weaves human relationships with each other and in the context of the natural world in a way that twists the heart. In a good way.

Included in Lit Hub's Book Marks 11 of the Most Anticipated Poetry Collections of Fall/Winter (September 16, 2020)

A Fine Canopy @ The SCA