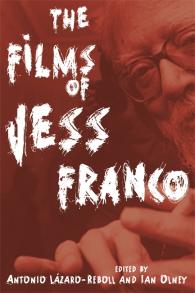 The Films of Jess Franco

The Films of Jess Franco looks at the work of Jesús "Jess" Franco (1930–2013), one of the most prolific and madly inventive filmmakers in the history of cinema. He is best known as the director of jazzy, erotically charged horror movies featuring mad scientists, lesbian vampires, and women in prison, but he also dabbled in a multitude of genres from comedy to science fiction to pornography. Although he built his career in the ghetto of low-budget exploitation cinema, he managed to create a body of work that is deeply personal, frequently political, and surprisingly poetic. Editors Antonio Lázaro-Reboll and Ian Olney have assembled a team of scholars to examine Franco’s offbeat films, which command an international cult following and have developed a more mainstream audience in recent years.

Arguing that his multifaceted, paradoxical cinema cannot be pinned down by any one single approach, this edited volume features twelve original essays on Franco’s movies written from a variety of different perspectives. The Films of Jess Franco does not avoid the methodologies most commonly used in the past to analyze Franco’s work—auteur criticism, genre criticism, and cult film criticism—yet it does show how Franco’s films complicate these critical approaches. This volume opens up fresh avenues for academic inquiry by considering his oeuvre from a range of viewpoints, including transnational film studies, cinephilia studies, and star studies. The book effectively meets the challenge of Franco’s multidimensional cinema with multifaceted criticism—attentive to the shifting historical contexts, modes of production and consumption, and formats of Franco’s work—that supplements current Franco scholarship and suggests exciting new directions for its further development.

The Films of Jess Franco seeks to address the scholarly neglect of this legendary cult director and to broaden the conversation around the director’s work in ways that will be of interest to fans and academics alike.

Antonio Lázaro-Reboll is senior lecturer in Hispanic Studies at the University of Kent (UK), where he teaches Spanish and European film. He is the author of Spanish Horror Film and co-editor with Andrew Willis of Spanish Popular Cinema. He has published several essays on the cross-cultural dialogue between Spanish horror and international traditions of the horror genre.

Ian Olney is an associate professor of English at York College of Pennsylvania, where he teaches film studies. He is the author of Zombie Cinema and Euro Horror: Classic European Horror Cinema in Contemporary American Culture, as well as numerous essays on European cinema and the horror film.

Jess Franco directed films that are often seen as wild, eclectic, and undisciplined. The brilliance of this work is to make sense of Franco’s work without losing its energy or variety. This is a clear and coherent collection that features a diverse range of scholars who approach Franco with differing approaches and concerns. Most amazingly, this is a collection which manages to tread an almost impossible tightrope with ease: It remains rigorously academic without ever losing sight of the things that draw audiences to Franco’s films.

– Mark Jancovich, professor of film and television studies at University of East Anglia

Given its strong scholarship, breadth and depth of inquiry, and inclusion of diverse perspectives, this anthology is an invaluable resource for researchers on Franco, Spanish cinema, and cult film. I am truly impressed by the range and quality of this collection.

– Aviva Briefel, co-editor of Horror after 9/11: World of Fear, Cinema of Terror

This volume is an overdue collection of essays on a bizarre, iconoclastic, yet somehow enduringly consequential filmmaker: Jess Franco. Lázaro-Reboll and Olney’s volume is the best one yet in terms of offering a helpful range of methods, focal points, and evolving analyses to keep pace with such a dynamic, indefatigable, and endlessly mutating filmmaker.

The Films of Jess Franco succeeds admirably in supporting the long overdue recognition of Franco as a cinematic (anti-) auteur whose career and work are worthy of in-depth analysis. [. . .] For the long-suffering Franco-phile, the publication of this book signals the vindication of a previously overlooked moviemaker worthy of serious study and unbridled celebration.

– Michael Orlando Yaccarino, co-author of the biography "Infinite Variety: The Life and Legend of the Marchesa Casati" and articles "Marquis Value: From Sade to Screen" and "Bloody Banquet"

A requisite for anyone conducting serious inquiry into Jess Franco.

For Franco fans, much of the information in this collection will be already well known; none the less the analysis of the individual contributions is engaging, and, though the more familiar Franco films still tend to be prominent in the discussions, the editors and contributors offer a reasonably three-dimensional perspective of the director that is well worth the reading time of anyone interested in his work or in Spanish and European horror filmmaking in general. The volume serves as a useful critical introduction and adds to the efforts elsewhere to reappraise the director.