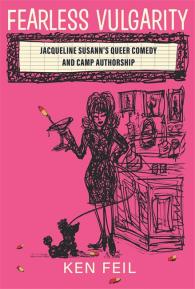 Catalyzed by her notoriously "dirty," fabulously successful bestseller Valley of the Dolls, the "Jackie Susann Sixties" brimmed with camp comedy that now permeates contemporary celebrations of the author, from Pee-wee’s Playhouse to RuPaul’s Drag Race and Lee Daniels’s Star. First christened "camp" by Gloria Steinem in an excoriating review of Valley of the Dolls and compounded by the publishing juggernauts The Love Machine (1969), Once Is Not Enough (1973), and Dolores (1976), the comedy of Jackie Susann illuminated conflicting positions about gender, sexuality, and aesthetic value. Through a writing formula that Ken Feil calls sleazy realism, Susann veers from gossip to confession and devises comedies of bad manners spun from real celebrities whose occasionally queer and always outré antics clashed with their "official" personas, the popular genres they were famous for, and the narrow, normative constructions of identity and reality shaped by the culture industry. Susann’s promotional appearances led to another comedy of bad manners, this one populated with critics alternately horrified and delighted by an upstart woman vulgarian barging into the male literary firmament, and which continues to inspire fascination for the author, her novels, and their legendarily bad film adaptations.

Ken Feil is the author of Rowan and Martin’s Laugh-In (Wayne State University Press, 2014) and Dying for a Laugh: Disaster Movies and the Camp Imagination. Feil has taught at Emerson College since 1995.

Unappreciated during her lifetime for her wit and her camp, and with her own bisexuality effaced yet kept as an open secret, Susann is well worth rediscovery today, especially through the lenses of queer theory and mass culture studies, as Feil convincingly proves. This is a learned and substantive book.

– Steven Cohan, author of Incongruous Entertainment: Camp, Cultural Value and the MGM Musical and Hollywood by Hollywood: The Backstudio Picture and the Mystique of Making Movies.

In Fearless Vulgarity, Ken Feil embarks on a detailed, fascinating, and illuminating study of Jacqueline Susann’s work. Eschewing camp as a reception practice, Feil argues that Susann encoded her work with camp sensibilities such that it could be read by her legions of readers as camp. Fearless Vulgarity is a vital contribution to studies of stardom, production, media, and camp.

Proving that ‘once is not enough,’ Ken Feil applies established expertise on genre and camp humor to the case of roman á clef author Jacqueline Susann. In Fearless Vulgarity: Jacqueline Susann’s Queer Comedy and Camp Authorship, Feil positions Susann’s relentless self-promotion and ‘bad manners’ novels about celebrity and sexual identity as central to the circulation of camp, feminism, and queer politics in popular culture since the 1960s. A critical work as fearless as its subject!

– Mary Desjardins, author of Recycled Stars: Female Film Stardom in the Age of Television and Video

Camp is lit within, and Jacqueline Susann, a writer stigmatized as trans by Truman Capote, will flicker further thanks to Fearless Vulgarity—and Feil’s unparalleled knack for the mass love machine.

Feil does a glorious job of capturing the candid, unapologetic nature of Susann’s personality and work, while breathing importance and meaning into what most of the world considered trash in the 1960s. For decades, only the die-hard film nerds and LGBTQIA+ pop-culture fanatics recognized Susann’s impact, but hopefully Feil’s book will open her legacy to a wider audience.