Home » Books » Fear and Other Stories 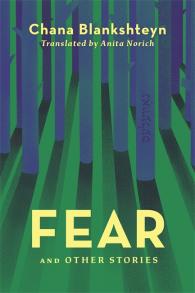 Fear and Other Stories

Fear and Other Storiesis a translation from Yiddish to English of the collected stories of Chana Blankshteyn (~1860–1939), a woman who may be almost entirely forgotten now but was widely admired during her long and productive life. The mere existence of these stories is itself a remarkable feat as the collection was published in July 1939, just before the Nazis invaded Poland and two weeks before Blankshteyn’s death. Anita Norich’s introduction argues that this is not a work of Holocaust literature (there are no death camps, partisans or survivors of WWII), but anti-Semitism is palpable, as is the threat of war and its aftermath. What could it have felt like to live under these conditions? How might a woman who was a feminist, a Jew, and an activist understand the recent past of war and revolution through which she had lived and also confront the horror that was beginning to unfold?

The nine stories in this volume take place primarily in Vilna, as well as various parts of Europe. As if presaging what was to come, World War I and Russian civil wars are the backdrops to these stories, as Jews and non-Jews find themselves under German occupation or caught up in the revolutionary fervor that promised them much and took away almost everything. The young women in Blankshteyn’s stories insist on their independence, on equality with their lovers, and on meaningful work. Like the men in the stories, they study, work, and yearn for love. The situations in which these characters find themselves may be unfamiliar to a contemporary reader, but their reactions to the turmoil, the frighteningly changing times, and the desire for love and self-expression are deeply resonant with today’s audience. The history may be specific, but the emotions are universal.

Blankshteyn’s stories are both a view of the final gasp of Eastern European Jewish culture and a compelling modern perspective on the broader world. Students and scholars of history and culture, women’s literature, and translation studies will wonder how they’ve gone this long without reading Blankshteyn’s work.

Anita Norich is Collegiate Professor Emerita of English and Judaic Studies at the University of Michigan.

With these nine stunning—and stunningly rendered—stories by the Yiddish modernist Chana Blankshteyn, Anita Norich demonstrates yet again the power of feminist translation as cultural salvage in the face of erasure and amnesia.

Anita Norich’s vivid, nuanced translations and illuminating introduction offer an important recovery project: the work of a forgotten Yiddish woman modernist, whose riveting stories explore the fracturing impact of historical crises (WWI, the Russian Revolution and Civil War, the rise of Nazism) on everyday life. Life affirming despite the horror, she explores the sense of community in a Jewish urban courtyard in Vilnius and collaborative work in a Paris fashion salon. In terse prose, we enter the thoughts of a Jewish woman mathematician, a medical researcher, and the revolutionary granddaughter of a Hasidic rabbi.

This is a remarkable collection of stories that speaks to important themes in Yiddish literature and interwar literature more broadly: panic and desperation, poverty, women’s education and professionalization, women’s vulnerability in romantic relationships, and the intersection of hope and hypocrisy. The volume is a significant contribution to the field because of the dearth of translations of women who wrote in Yiddish and the growing, valiant impetus to champion their writing. These stories give us a window into the immediate prewar moment, one that is often described and remembered through the lens of the catastrophic events that followed.

– Jessica Kirzane, editor-in-chief of In geveb

Reading as a translator, it is usually tempting to pick up the Yiddish every few paragraphs, peer at a word choice, and try to trace the seams. But in Norich’s hands, Blankshteyn’s stories are so smooth, their diction so inevitable, as to constitute that elusive achievement: ‘a second original.'

– Miriam Udel, editor and translator, Honey on the Page: A Treasury of Yiddish Children’s Literature

With a delicate and magical pen, Blankshteyn shows us men and women living through tumultuous times. Translator Anita Norich has rescued a treasure.

– Ellen Cassedy, author of We Are Here: Memories of the Lithuanian Holocaust

Anita Norich’s sensitive translations bring Blankshteyn’s artful voice to a new generation of readers. Blankshteyn’s stories are alive with the cosmopolitan worlds of interwar Jewish life, vibrating with energy and possibility against the tense backdrop of war and revolution in Europe. In them we find deeply personal expressions of Jewish modernity: a Soviet official marries the granddaughter of a Hasidic rebbe in a secret religious ceremony; a young mathematician loses herself in a reverie replete with nymphs and sprites; and the daughter of a Parisian artist model, abandoned by her mother, becomes the head seamstress in a fashion atelier, seeking love and family. These tales, first published on the eve of the Nazi invasion of Poland, offer a unique view of European Jewry from the pen of a talented woman writer.

From the frontlines of war and revolution to a Paris salon and the social complexities of an Eastern European Jewish courtyard, the rediscovery of Chana Blankshteyn expands our vision with stories from the interwar Yiddish press that shocked and moved readers in her own time, and now in our own. Fear and Other Stories joins a growing list of translations that challenge and expand our understanding of modern Yiddish literature. Anita Norich has been at the forefront of the necessary rereading.

All in all, it’s a fascinating mixed bag. As editor and translator Anita Norich notes, writing was only one aspect of Blankshteyn’s active cultural and political life (she was deeply involved with the Yiddish People’s Party). What is most noteworthy is that, with the exception of the affecting "Director Vulman," Nazi barbarism is not explicitly addressed in these stories. The romances and conflicts are touching in their relative normalcy, their determined belief in progress and happy endings. As such, they offer invaluable portraits of a world and a people that were soon to be obscured by darkness.

All nines stories in "Fear and Other Stories" were well done and featured interesting plots and characters. My hope is that Blankshteyn’s work will now reach a wider audience.

It’s an important book and another triumph of feminist translation, as it expands the canon and shows what women were thinking about. It is also, of course, a miraculous survivor from the once-thriving literary scene of Jewish Vilna.

Fear and Oth­er Sto­ries is an excel­lent intro­duc­tion to a world of women’s Yid­dish lit­er­a­ture?—?much of which remains inac­ces­si­ble. This col­lec­tion is inspir­ing, and should encour­age a deep­er dive into sur­viv­ing archives for those writ­ers whose work remains unknown for now.

24 min 8 sec ago
TONIGHT! Join @stephanie_heit at @ShopBooksweet for local author's night! https://t.co/pTny5OErDe
22 hours 7 min ago
Have you had a chance to check out our new Spring & Summer 2023 Catalog?! From a new lyric essay collection to a p… https://t.co/cNAo9WjL9K
1 day 20 hours ago
RT @shondabuchanan: Tonight! Feb. 1, 2023, 6:30pm Mountain Time -- Virtual reading for #lewisandclarklibrary Lewis & Clark Library in H… https://t.co/UAmMoIlq1w