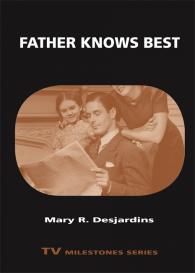 Although the iconic television series Father Knows Best (CBS 1954–55; NBC 1955–58; CBS 1958–60) has enjoyed a long history in rerun syndication and an enduring fan base, it is often remembered as cultural shorthand for 1950s-era conformism and authoritarianism. In this study of Father Knows Best, author Mary R. Desjardins examines the program, its popularity, and its critical position within historical, industrial, and generic contexts to challenge oversimplified assumptions about the show’s use of comedy and melodrama in exploring the place of family in mid-twentieth-century American society.

Desjardins begins by looking at Father Knows Best within media and production contexts, including its origin on radio, its place in the history of Screen Gems telefilm production, and its roots in the backgrounds and creative philosophies of co-producer Eugene Rodney and star-producer Robert Young. She goes on to examine the social contexts for the creation and reception of the series, especially in the era’s emphasis on family togetherness, shared parenting by both father and mother, and generational stages of the life cycle. Against this background, Desjardins also discusses several Father Knows Best episodes in-depth to consider their treatment of conflicts over appropriate gender roles for women. She concludes by exploring how the series’ cast participated in reevaluations of the Anderson family’s meaning in relation to "real families" of the fifties, through television specials, talk show appearances, magazine and book interviews, and documentaries.

Mary R. Desjardins is associate professor of film and media studies at Dartmouth College. She is also the author of Recycled Stars: Female Film Stardom in the Age of Television and Video and co-editor of Dietrich Icon.

Rejecting the notion that postwar sitcoms were inevitably superficial and silly, Desjardins teases out the show’s complexities, explains how its writers, producers, and actors aimed to combine domestic comedy with thoughtful treatments of family issues, and gives welcome attention to the series’ cautiously progressive attitudes toward masculinity and femininity, gender equality, parental authority, conformity, patriarchy, and other pressing issues of its day.

– David Sterritt, professor of film at Columbia University and the Maryland Institute College of Art and author of The Honeymooners (Wayne State University Press, 2009)

Jim and Margaret Anderson—and Betty, Bud, and Kathy—all come to life afresh in this insightful reappraisal of an iconic television series. Using original archival research, rich narrative detail, and a consideration of the series’ rerun status, Desjardins uncovers ambiguities in the sitcom’s lessons about gender and generational struggles that question the patriarchal conformity of the program’s title.

– Marsha Cassidy, Department of English and the Honors College, University of Illinois at Chicago and author of What Women Watched: Daytime Television in the 1950s

In a slim 117-page volume, part of the "TV Milestones Series" published by Wayne State University Press, Desjardins gives us a balanced view of what makes Father Knows Best a cultural icon. It is recommended for fans and scholars alike.