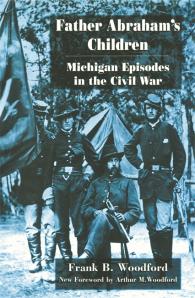 Michigan Episodes in the Civil War

The Civil War was the largest and bloodiest conflict ever waged upon American soil, and while no fighting took place in Michigan, both the hardship of the war effort and the heroism of Michigan men at war touched residents deeply. In Father Abraham’s Children: Michigan Episodes in the Civil War, Frank Woodford collects personal remembrances of the war from many sources. Originally published in 1961 and reissued in 1999, this volume is not a formal account of Michigan’s part in the conflict or an analysis of military strategy and wartime politics, but instead presents stories of Michigan soldiers, both as individuals and as units, and their actions, thoughts, and aspirations, presented for the first time in a paperback edition.

Among the episodes Woodford recounts with a wealth of colorful detail are Michigan’s participation in the Underground Railroad; the strange tale of Sarah Emma Edmonds, alias Private Franklin Thompson; the ill-fated strategy that led to the slaughter at the Crater; an odyssey of escape from Danville and from Libby Prison; the bizarre Confederate plot to capture a Federal sloop-of-war on Lake Erie; the Michigan Cavalry Brigade’s exploits under George Custer; the chance encounter with a Michigan soldier that brought death to the gallant Jeb Stuart; impressions and descriptions of camp life and the ordinary routine of a soldier from the diary of Private Frank Lane; the disaster of the First Michigan at Bull Run; the story of Michigan’s medical services and the origin of Harper Hospital; the Detroit Riot of 1863; and the nightmare explosion of the steamer Sultana with a death toll of over 1,200 soldiers on their way home from Confederate prisons.

Civil War buffs and readers interested in Michigan history will be grateful for the paperback edition of Father Abraham’s Children.

10 hours 31 min ago
In honor of the #CityofDetroit turning 321 years old on July 24th, WSUPress will be showcasing one Detroit Book of… https://t.co/PA7nONh4C0
15 hours 33 min ago
OUR FALL & WINTER 2022 TITLES ARE NOW AVAILABLE FOR PRE-ORDER! Grab your copy of any of our fall & winter titles f… https://t.co/qDykAsF9sk
2 days 16 hours ago
Happy Pub Date to THE SPOOK WHO SAT BY THE DOOR, SECOND EDITION! This new edition of a literary classic now includ… https://t.co/XrCsLZvf4D