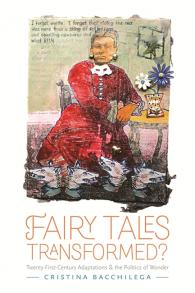 Twenty-First-Century Adaptations and the Politics of Wonder

Fairy-tale adaptations are ubiquitous in modern popular culture, but readers and scholars alike may take for granted the many voices and traditions folded into today's tales. In Fairy Tales Transformed?: Twenty-First-Century Adaptations and the Politics of Wonder, accomplished fairy-tale scholar Cristina Bacchilega traces what she terms a "fairy-tale web" of multivocal influences in modern adaptations, asking how tales have been changed by and for the early twenty-first century. Dealing mainly with literary and cinematic adaptations for adults and young adults, Bacchilega investigates the linked and yet divergent social projects these fairy tales imagine, their participation and competition in multiple genre and media systems, and their relation to a politics of wonder that contests a naturalized hierarchy of Euro-American literary fairy tale over folktale and other wonder genres.

Bacchilega begins by assessing changes in contemporary understandings and adaptations of the Euro-American fairy tale since the 1970s, and introduces the fairy-tale web as a network of reading and writing practices with a long history shaped by forces of gender politics, capitalism, and colonialism. In the chapters that follow, Bacchilega considers a range of texts, from high profile films like Disney's Enchanted, Guillermo del Toro's Pan's Labyrinth, and Catherine Breillat's Bluebeard to literary adaptations like Nalo Hopkinson's Skin Folk, Emma Donoghue's Kissing the Witch, and Bill Willingham's popular comics series, Fables. She looks at the fairy-tale web from a number of approaches, including adaptation as "activist response" in Chapter 1, as remediation within convergence culture in Chapter 2, and a space of genre mixing in Chapter 3. Chapter 4 connects adaptation with issues of translation and stereotyping to discuss mainstream North American adaptations of The Arabian Nights as "media text" in post-9/11 globalized culture.

Bacchilega's epilogue invites scholars to intensify their attention to multimedia fairy-tale traditions and the relationship of folk and fairy tales with other cultures' wonder genres. Scholars of fairy-tale studies will enjoy Bacchilega's significant new study of contemporary adaptations.

Cristina Bacchilega is professor of English at the University of Hawai'i at Manoa, where she teaches fairy tales and their adaptations, folklore and literature, and cultural studies. She is also the author of Postmodern Fairy Tales: Gender and Narrative Strategies and of Legendary Hawai'i and the Politics of Place: Tradition, Translation, and Tourism, and the co-editor with Danielle Roemer of Angela Carter and the Fairy Tale (Wayne State University Press, 2001) and with Donatella Izzo and Bryan Kamaoli Kuwada of Anglistica's special issue on "Sustaining Hawaiian Sovereignty."

Once again, accomplished fairy-tale scholar Cristina Bacchilega has produced a superb, thoroughly researched, and well-rounded book of the highest academic and scholarly standards. . . . This is not light, casual reading but a well-researched study principally geared towards an academic readership. The author incorporates numerous colorful graphics and illustrations to make her arguments more vivid. Each chapter can stand alone, but read together they offer compelling testimony to Bacchilega’s sheer range of expertise and analytical insight. Fairy Tales Transformed? is a model of scholarship highly recommended to anyone interested in fairy-tale studies and modern fairy-tale adaptations.

Fairy Tales Transformed? Twenty-First-Century Adaptations and Politics of Wonder is an important work for scholars and graduate students of literature, folklore, cultural anthropology and postcolonial studies. Its analytical paradigm is relevant beyond the geographical areas under consideration in the book.

This analysis by Cristina Bacchilega offers an updated and challenging approach to the study of fairy tales in contemporary societies. . . . With clear and engaging prose, the author offers both academic scholars and readers interested in fairy tales a wise analysis of changes in fairy-tale patterns and globalized societies of the early 21st century, connected with poetics and politics of wonder.

...A generous and expansive work of scholarship that refuses totalizing claims for the interpretation of fairy tales, and instead lays the groundwork for an ongoing, culturally sophisticated, theoretically nuanced debate. This in itself makes Fairy Tales Transformed? essential reading for all students of the contemporary fairy tale.

In calling attention to voices and practices generally neglected by scholars of fairy tales and adaptations and in seeking new ways of mapping the fairy-tale universe that would honor the power of these voices and practices, Bacchilega provides a fitting counterpart to Simone Murray’s renewed call for a sociology of adaptation. In fact,she goes Murray one better, supplementing her critique of what might be called the fairy-tale industry by anatomizing a wealth of alternative practices and proposing a provocative array of new models that might well provide a firmer sociologica, economic, and cultural context for that industry. Adaptation scholars take note.

Cristina Bacchilega persuasively examines the poetics and politics of wonder at work in contemporary production and reception of fairy tales. While illustrating the concept of 'fairy-tale web,' Bacchilega foregrounds the issue of scholarly responsibility. This is a compassionate, collegial, important book.

– Francisco Vaz da Silva, professor of folklore and anthropology at Instituto Universitário de Lisboa and author of Metamorphosis: The Dynamics of Symbolism in European Fairy Tales and Archeology of Intangible Heritage

Engaging the TV watcher, the folktale scholar, and the world of sampling, wiki, and remix, Cristina Bacchilega uncovers the magic and wonder proclaimed to that world by fairy tales.

By attending to networks of multi-media productions, exploring robust models of transformative possibilities, and attempting to map connections on a global scale, Bacchilega has opened up the field of fairy-tale scholarship in remarkable ways. An ambitious vision of the poetics and politics of fairy-tale production guides her at all times, even when she turns to fine-grained analysis of specific works.

Bacchilega offers a dazzling array of fairy tale adaptions, ranging from well-known movies like Enchanted to less-known non-American films, books, art projects, and graphic novels. . . The depth of Bacchilega's understanding is truly amazing, and her discussion of individual texts is always illuminating. . . An engaging and powerful work on an important set of texts.

Fairy Tales Transformed? offers a critical overview of both recent fairy-tale scholarship and recent fairy-tale
adaptations. . . . Bacchilega’s clear prose guides readers through this worldly web of texts, urging us to attend to what is at stake in these retellings, who holds access to power and resources, and how fairy-tale depictions of self and Other matter in politics as well as storytelling. . . . Not every work of scholarship manages to both provide an overview of recent genre transformations as well as scholarship thereon, while also issuing a compelling appeal to combat oppression, but Bacchilega’s does.