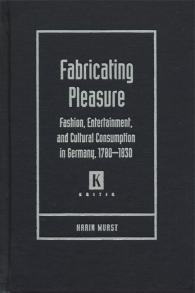 Entertainment, defined as occasions for creating pleasure, added an important dimension to the lifestyle and self-definition of the German middle class around the turn of the nineteenth century. Modern forms of culture and consumption appearing around this time not only enhanced pleasure in physical sensations but also enabled imaginary sensations in the absence of actual stimuli. Desiring, rather than having, became an important mode of cultural consumption, linking products and practices with self-image, serving to express social identity in an increasingly more anonymous society—a society where the modern freedom of choice brought with it a loss of tradition and the stability attached to it.

Fabricating Pleasure traces the creation of this unique form of domestic culture, showing how the bourgeoisie of late-eighteenth- and early-nineteenth-century Germany fused consumption with high culture. Author Karin Wurst illuminates the sociohistorical context and the emergence of the modern middle class, its differentiation, and its conception of culture. In her thoughtful analysis, Wurst reconstructs the roles of Empfindsamkeit (sensibility) and the new love paradigm, examining the change in mentality they fostered through the reconceptualization of pleasure and entertainment. The book also discusses the relationship between print culture (using Bertuch’s Journal des Luxus und der Moden as its prime example) and an increase in social mobility. From art and music to fashion and travel, Wurst places these popular forms of entertainment and pleasurable diversion in their social and historical contexts and also shows how they have remarkable bearing on present-day debates on cultural literacy.

Karin Wurst explores the evolution of the middle class in late eighteenth- and early nineteenth-century Germany and considers the change of mentality behind its embrace of pleasure and entertainment. She reads the increase and diversity of cultural practices and emergence of cultural consumerism as key elements in middle-class identity formation. This text is a must read for scholars interested in consumer culture more generally and eighteenth-century studies more specifically."

Wurst is clearly well-read in literature and history, and her book raises many promising topics as it ambitiously seeks to reveal over-looked nuances in post-Enlightenment German middle-class culture."

This impressive volume represents a wide-ranging study of a very timely topic, and it carries this task out in a very thorough and overall clear manner."

Karin Wurst's fascinating new study offers the most comprehensive treatment to date of the many facets of consumer culture…Wurst's analysis deepens our understanding of consumer culture in late-eighteenth- and early-nineteenth-century Germany; it sheds new light on the role of entertainment and pleasure in the construction of class and gender identities; and it generates reflection on a host of topics that have great relevance for future research. It is a book that makes an important contribution to the field and will prove valuable to wide range of scholars from a variety of disciplines."