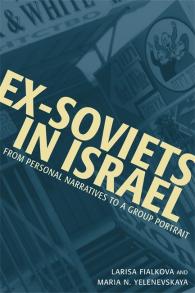 From Personal Narratives to a Group Portrait

This book stands out for its truly interdisciplinary approach; its authentic, first-hand depiction of the immigrant experience; and its intellectual honesty, for the authors do not try to censor or soften the speech and thus the image of the narrators, who often express tough and politically incorrect opinions.

In the final years of the Soviet Union and into the 1990s, Soviet Jews immigrated to Israel at an unprecedented rate, bringing about profound changes in Israeli society and the way immigrants understood their own identity. In this volume ex-Soviets in Israel reflect on their immigration experiences, allowing readers to explore this transitional cultural group directly through immigrants’ thoughts, memories, and feelings, rather than physical artifacts like magazines, films, or books.

Drawing on their fieldwork as well as on analyses of the Russian-language Israeli media and Internet forums, Larisa Fialkova and Maria N. Yelenevskaya present a collage of cultural and folk traditions—from Slavic to Soviet, Jewish, and Muslim—to demonstrate that the mythology of Soviet Jews in Israel is still in the making. The authors begin by discussing their research strategies, explaining the sources used as material for the study, and analyzing the demographic profile of the immigrants interviewed for the project. Chapters use immigrants’ personal recollections to both find fragments of Jewish tradition that survived despite the assimilation policy in the USSR and show how traditional folk perception of the Other affected immigrants’ interaction with members of their receiving society. The authors also investigate how immigrants’ perception of time and space affected their integration, consider the mythology of Fate and Lucky Coincidences as a means of fighting immigrant stress, examine folk-linguistics and the role of the lay-person’s view of languages in the life of the immigrant community, and analyze the transformation of folklore genres and images of the country of origin under new conditions.

As the biggest immigration wave from a single country in Israel’s history, the ex-Soviet Jews make a fascinating case study for a variety of disciplines. Ex-Soviets in Israel will be of interest to scholars who work in Jewish and immigration studies, modern folklore, anthropology, and sociolinguistics.

Larisa Fialkova is a senior researcher in the department of Hebrew and comparative literature at the University of Haifa.

Maria N. Yelenevskaya is senior teaching fellow in the department of humanities and arts at the Technion-Israel Institute of Technology, Haifa.

Ex-Soviets in Israel provides a unique opportunity to 'hear' real voices of the Russian-speaking immigrants to Israel and trace cultural antecedents of their discourse. The authors have demolished the ice wall between the Russian and Western academic worlds. A valuable resource for experts and students alike, this book is a must for libraries in humanities and social sciences."

– Vladimir Khazan, professor of Russian and Slavic studies at the Hebrew University of Jerusalem and author of Petersburg in the Poetry of Russian Emigration

This book by Larisa Fialkova and Maria N. Yelenevskaya, Soviet-educated and socially minded linguists who were themselves part of this migration wave, highlights the unmediated voices of their fellow immigrants, who narrate their life stories, express their opinions and attitudes toward their new homeland, and depict the predicaments of integration and complex relations with Israel's natives and long-term immigrants. The authors draw a fascinating picture of the uneasy encounter between mosaic Israeli society (with its diversity of ethnic and religious identities) and its new citizens who continue to draw on their old Soviet cultural and social baggage in interpreting the new reality. This book stands out for its truly interdisciplinary approach; its authentic, first-hand depiction of the immigrant experience; and its intellectual honesty, for the authors do not try to censor or soften the speech and thus the image of the narrators, who often express tough and politically incorrect opinions.

The book presents an impressive and badly needed collective portrait" of Russian Israel as seen through the lens of ex-Soviet Israeli scholars."

This is a book that deserves great interest not only among sociologists and other scholars, but also among readers who want to better understand the evolution of the Israeli society."

This study was carefully conceived and executed. The authors are both well read in the academic literature and, as members of the community they are studying, well placed to follow and explicate the nuances in the subjects' narratives. The material that they have collected and interpreted is wide ranging and of extraordinary interest."

– Alice S. Nakhimovsky, professor of Russian and Jewish studies at Colgate University and author of Witness to History: The Photographs of Yevgeny Khaidei

Richly interdisciplinary in its methods and well grounded in a range of literatures from folkloristics to diaspora studies, Fialkova and Yelenevskaya's work makes an essential contribution to the growing scholarship on Russian immigrant communities in Israel, as well as to the anthropology of the former Soviet Union and Eastern Europe. What is most compelling about this study is that the authors go well beyond uncovering patterns, themes, and fetishes of narrative (though these they explore well): they also actively question and skillfully analyze their interlocutors' own theories about language; Soviet, Russian, and Israeli mentalities, 'interethnic exchanges,' 'xenophobia,' and the symbolics of cultural geography."

– Nancy Ries, associate professor of anthropology and peace and conflict studies and author of Russian Talk: Culture and Conversation during Perestroika

In this well-conceived engaging exploration of life and attitudes of ex-Soviets in Israel, there is much narrative derived from interviews, well-constructed bridge comments connecting them, and accompanying insightful comments and useful analyses. Fialkova and Yelenevskaya successfully convey a surprisingly broad social picture of this large varied immigrant population. There is an extensive bibliography and brief but useful indexes. A valuable contribution to Israeli, migration, and Soviet studies."

Overall, this is an engaging, lively, and extremely rich study depicting a fairly unusual situation and offering a lot of 'food for thought' to readers interested in the complexities of identity construction, intercultural conflict, and transnational migration."

The joint work of folklorist Larisa Fialkova and linguist Maria N. Yelenevskaya is unique in its attention to the oral or folk narrative creation of this significant group in the inclusive Israeli context. It is also an interesting case study of the relationship between newcomers and (relatively) veteran citizens."