Home » Books » "The Events of October" 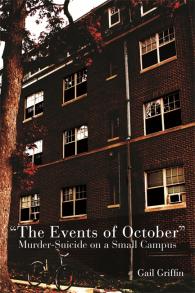 "The Events of October"

Murder-Suicide on a Small Campus

Vital and disturbing, 'The Events of October' unpacks the devastating implications of the narratives we still tell ourselves about gender, love, and power.

On a Sunday night during Homecoming weekend in 1999, Neenef Odah lured his ex-girlfriend, Maggie Wardle, to his dorm room at Kalamazoo College and killed her at close range with a shotgun before killing himself. In the wake of this tragedy, the community of the small, idyllic liberal arts college struggled to characterize the incident, which was even called "the events of October" in a campus memo. In this engaging and intimate examination of Maggie and Neenef’s deaths, author and Kalamazoo College professor Gail Griffin attempts to answer the lingering question of "how could this happen?" to two seemingly normal students on such a close-knit campus.

Griffin introduces readers to Maggie and Neenef—a bright and athletic local girl and the quiet Iraqi-American computer student—and retraces their relationship from multiple perspectives, including those of their friends, teachers, and classmates. She examines the tension that built between Maggie and Neenef as his demands for more of her time and emotional support grew, eventually leading to their breakup. After the deaths take place, Griffin presents multiple reactions, including those of Maggie’s friends who were waiting for her to return from Neenef’s room, the students who heard the shotgun blasts in the hallway of Neenef’s dorm, the president who struggled to guide a grieving campus, and the facilities manager in charge of cleaning up the crime scene. Griffin also uses Maggie and Neenef’s story to explore larger issues of intimate partner violence, gun accessibility, and depression and suicide on campus as she attempts to understand the lasting importance of their tragic deaths.

Griffin’s use of source material, including college documents, official police reports, Neenef’s suicide note, and an instant message record between perpetrator and victim, puts a very real face on issues of violence against women. Readers interested in true crime, gender studies, and the culture of colleges and universities will appreciate "The Events of October."

Gail Griffin is Parfet Distinguished Professor of English at Kalamazoo College, a poet and essayist, and the author of two volumes of nonfiction, Calling: Essays on Teaching in the Mother Tongue and Season of the Witch: Border Lines, Marginal Notes.

Griffin's astute analysis of a 1999 murder and suicide on the Kalamazoo College campus probes the links between intimate violence and larger cultural patterns, offering educators, students, and parents a map for change. Vital and disturbing, 'The Events of October' unpacks the devastating implications of the narratives we still tell ourselves about gender, love, and power."

– Joy Castro, author of The Truth Book: A Memoir

With respect for the two lives lost, but with a message to society at large, Griffin explains that this is much more than a story of a nice young man who just snapped one day after his girlfriend called off the relationship. Read it and talk about it."

The Events of October' powerfully accomplishes what the media fails to do in the wake of violence on college campuses: lends meaning to actions that would otherwise remain inscrutable. Griffin's book is a compelling personal reaction to a tragic event, which is supplemented with research and interviews. The result is a comprehensive and rigorous exploration of violence against women. Ezra Pound once noted that 'literature is news that stays news.' 'The Events of October' embodies exactly that kind of staying power."

1 hour 52 min ago
Wayne State University President M. Roy Wilson with his teacher in high school. Check out this image and many more… https://t.co/W3kp1D7dFX
1 day 1 hour ago
HAPPY PUB DATE! Dan Gerber said "If you make yourself available to Cindy Hunter Morgan’s poems, they will revivif… https://t.co/L60dTqsUUj
1 day 21 hours ago
Grab your copy or e-book of @fkwang's YOU CANNOT RESIST ME WHEN MY HAIR IS IN BRAIDS today! https://t.co/htFDjNa9yj https://t.co/zHyt049441