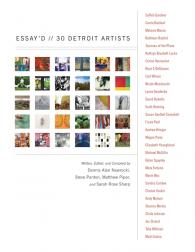 Essay’d: 30 Detroit Artists highlights the individual contributors to Detroit’s thriving and diverse art scene. Stemming from the popular website of the same name, Essay’d seeks to introduce readers to some of the contemporary art practitioners who live and work in Detroit or have participated in the Detroit community in an important way. Even those familiar with Detroit and its art ecosystem are sure to find new insight and perspective on artists that have made their careers in Detroit.

Four arts writers within the Detroit community—a professor, a gallerist, and two critics—create an ongoing series of short essays that focus briefly and intensely on standout artists. This blending of critical sensibilities and interests provides a unique perspective on a diverse place, offering many points of interest and access to one of the most vital and intriguing art environments in the country. While many artists have helped to grow and shape the local art tableau, the authors selected thirty for this volume, including Signal Return’s artistic director Lynne Avadenka; "The Detroit Portrait Series" artist Nicole Macdonald; 2012 DLECTRICITY performers Tzarinas of the Plane; and 2013 Kresge fellow Carl Wilson to name a few. This book is not a systematic attempt to identify the "best" or "most important" Detroit artists, or even to define what those terms mean. The position the essays take to their subjects is not critical but neither is it reverential. The objective is to create a platform for Detroit artists, not a pedestal.

Essay’d is an excellent introduction to the Detroit art landscape, as well as an opportunity to deepen one’s knowledge of the Detroit art scene and its players. Art lovers and regional history buffs will not want to miss this collection.

Dennis Alan Nawrocki serves as adjunct faculty in the department of art and art history at Wayne State University. He directed Center Galleries at Detroit’s College for Creative Studies from 1990 to 1998, in addition to teaching art history there from 1990 to 2005. Author of Art in Detroit Public Places (Wayne State University Press, 2008) and a freelance critic, Nawrocki has reviewed national and international exhibitions for Art in America, Sculpture, American Ceramics, New Art Examiner, and Metro Times.

Steve Panton is the founder of 2739 Edwin and 9338 Campau galleries, and co-founder of the Hamtramck Neighborhood Arts Festival and the Free School of Hamtramck. Prior to founding 9338 Campau, he worked as a technologist and educator for thirty-five years, starting as an engineering apprentice and ending as the business manager for a medium-sized business unit. His personal interests are in interdisciplinary projects at the intersection of pedagogy, research, and exhibition making.

Matthew Piper has been writing about art in Detroit since 2011, when he served as the inaugural KnightArts Detroit blogger. His work has appeared in Bad at Sports, Detroit Research, Infinite Mile, and Model D. He has degrees from Wayne State University in English literature and film studies, and library and information science.

The Essay’d project is straightforward and elegant. It helps fill a gap in the discussion about how and why art is made without ‘art speak’ or pretension. This thoughtful project is one of the most valuable tools we have in the visual arts arsenal to date because it helps shed light on the sometimes bewildering, sometimes intriguing business of why artists make the art they do.

Wayne State University Press has captured the vibrancy of the contemporary art community at this critical moment of Detroit’s cultural renaissance in the visual arts. Essay’d speaks to the inspiration, dedication, and creativity of individuals living and working in this great city.

– Salvador Salort-Pons, Ph.D., director, president, and CEO of the Detroit Institute of Arts

With a series of short thoughtful essays compiled from an eponymous monthly website and lavishly illustrated, Essay’d serves as a timely introduction to many of the vital, diverse, and highly accomplished artists who are part of the hopping Detroit art scene today.

– Dora Apel, author of Beautiful Terrible Ruins: Detroit and the Anxiety of Decline

The articles in Essay’d go directly to the heart of the artists' work. Written with insight, precision, and clarity for both artists and the general reader, with no 'mumbo jumbo' art speak, it provides a non-judgmental overview of the explosive Detroit art scene.

The depth and diversity of Detroit’s visual art scene gets its due in Essay’d: 30 Detroit Artists . . . newcomers and aficionados looking for a one-stop guide to contemporary artists working in Detroit would benefit from starting here.

Dennis A. Nawrocki, Matthew Piper, Steve Panton, and Sarah Rose Sharp knew the wealth of talent that originated right here in Metro Detroit, and together, started to draft the individual narratives of many of the region’s artists, known at local galleries, art centers, and some who had earned national acclaim.

The thirty artists profiled here are diverse, of Detroit, long practicing or younger, and deserve the attention provided by the well-reproduced images of their art and short texts about it, by four insightful, local writers. The book is an important compilation of some of the art in this area.