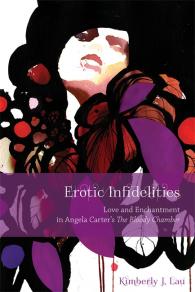 Love and Enchantment in Angela Carter's The Bloody Chamber

Lau begins by situating her reading of The Bloody Chamber—as individual stories and as a collection—within and against the critical literature, especially that which addresses Carter’s relationship to psychoanalytic theory and issues of language and desire. In chapter 2, she illustrates Carter’s construction of gender and language as labyrinthine structures—complex cultural edifices constructed and augmented over time. She moves on to consider Carter’s "feline stories" in chapter 3—"The Courtship of Mr. Lyon," "The Tiger’s Bride," and "Puss-in-Boots"—as an initial move away from the labyrinthine structures and toward an alternate erotics. In chapter 4, she reads "The Erl-King" and "The Snow Child" as another pair of mirrored tales, while chapter 5 elaborates on the pedophilic and necrophiliac fantasies of a pornographic culture, introduced in the previous chapter with the Count’s desire for the Snow Child. In chapter 6, Lau situates Carter’s three concluding stories—the wolf trilogy—within the context of feminist psychoanalytic understandings of infidelity as that which destabilizes patriarchal hegemonies and constructs.

Kimberly J. Lau is professor of literature at the University of California, Santa Cruz. She is the author of New Age Capitalism: Making Money East of Eden and Body Language: Sisters in Shape, Black Women’s Fitness, and Feminist Identity Politics.

Dr. Lau’s beautifully written book revisits one of the most beloved, perplexing fairy-tale texts of the twentieth century, Angela Carter's The Bloody Chamber, and dwells in its most unfamiliar and challenging moments in order to illuminate its unique, destabilizing enchantments. Working at the intersection of fairy tale, folklore, feminist, and literary studies, Lau explores the ways in which desire and infidelity can disrupt patriarchal norms and constructs.

In this significant contribution to second-wave Carter criticism, Kimberly J. Lau returns to The Bloody Chamber to tease out the transformative strategies and emancipatory force of its ‘alternate erotics’ against love’s entrapment in fairy-tale tropes and cultural myths. True to the author’s project, Lau’s subtle and thoughtful close readings capture the ethical implications of Carter’s literary experimentations that reconcile intellect and affect, theory and literary practice, poetics and politics, and thus highlight the utopian potential of enchantment.

Kimberly Lau’s book-length study of Angela Carter’s The Bloody Chamber seeks to explore not only the individual stories of Carter’s famous collection, but also the poetics of the volume as an aesthetic whole. This is one of the most innovative aspects of the book, as this dimension of Carter’s work has often been neglected.

This book offers intelligent insights to the reader of Carter’s work. Because Lau’s discussion makes consistent, sophisticated use of theory, academic readers are the ideal audience. Lau’s familiarity with Carter’s thinking, the array of Carter critics she deploys, and the variety of texts she handles in her arguments reflect an extremely well-researched book. All scholars interested in Carter’s The Bloody Chamber would benefit from reading Lau’s book. Her reading of the tales as part of a larger arc that moves from familiar to unfamiliar, from civilization and culture to nature and from tradition to exploration of difference convincingly realigns our view of Carter’s work. Readers will enjoy Lau’s combination of close reading, juxtaposition of texts, and energetic prose.

– Susan M. Bernardo, Journal of the Fantastic in the Arts