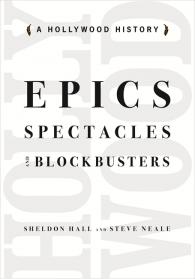 The pantheon of big-budget, commercially successful films encompasses a range of genres, including biblical films, war films, romances, comic-book adaptations, animated features, and historical epics. In Epics, Spectacles, and Blockbusters: A Hollywood History authors Sheldon Hall and Steve Neale discuss the characteristics, history, and modes of distribution and exhibition that unite big-budget pictures, from their beginnings in the late nineteenth century to the present. Moving chronologically, the authors examine the roots of today’s blockbuster in the "feature," "special," "superspecial," "roadshow," "epic," and "spectacle" of earlier eras, with special attention to the characteristics of each type of picture.

In the first section, Hall and Neale consider the beginnings of features, specials, and superspecials in American cinema, as the terms came to define not the length of a film but its marketable stars or larger budget. The second section investigates roadshowing as a means of distributing specials and the changes to the roadshow that resulted from the introduction of synchronized sound in the 1920s. In the third section, the authors examine the phenomenon of epics and spectacles that arose from films like Gone with the Wind, Samson and Deliliah, and Spartacus and continues to evolve today in films like Spider-Man and Pearl Harbor. In this section, Hall and Neale consider advances in visual and sound technology and the effects and costs they introduced to the industry.

Scholars of film and television studies as well as readers interested in the history of American moviemaking will enjoy Epics, Spectacles, and Blockbusters.

Sheldon Hall is a senior lecturer in stage and screen studies at Sheffield Hallam University and author of Zulu: With Some Guts Behind It – The Making of the Epic Film and co-editor (with John Belton and Steve Neale) of Widescreen Worldwide.

Steve Neale is professor of English at the University of Exeter and author and editor of several books, most recently, Genre and Contemporary Hollywood.

Hall and Neale illuminate the evolution of the exhibition of films from early nickelode­ons, picture palaces, and drive-ins to our millennium's multiplexes, IMAX theaters, and DVD home cinema. . . This book is an excellent resource for any scholar who is either writing a thesis or teaching film studies.

This is the book many of us have been waiting for: a comprehensive and systematic new account of American film history which puts its costliest productions and biggest hits first. Accessibly written and extremely well researched, this study forces us to revise our understanding of Hollywood's past and present.

– Peter Kr?mer, senior lecturer in film studies, University of East Anglia, author of The New Hollywood: From Bonnie and Clyde to Star Wars

Hall and Neale have produced the first serious history of the type of film that made-and continues to make-Hollywood famous. Built on a solid foundation of serious scholarship, all the major archives have been consulted along with an enormous range of books and articles on Hollywood cinema."

– Rick Altman, professor of cinema and comparative literature at the University of Iowa and author of Silent Film Sound

From Birth of a Nation to Titanic, from Intolerance to Heaven's Gate, Hollywood's greatest triumphs and disasters have been big-budget spectaculars marketed on their monumental scale. Pioneering a new kind of cinema history, Sheldon Hall and Steve Neale tell the epic story of how these commercial behemoths have been packaged and sold to the public, showing us that the movies' cultural significance is as much a product of how they are distributed and consumed as it is of their production."

Sheldon Hall and Steve Neale's new book Epics, Spectacles, and Blockbusters offers a necessary corrective to the balance of the blockbuster debate. It provides a clear, chronological account of industry trends, starting with imported 'passion plays' in the 1900s, and culminating with the release of Avatar at the end of 2009. Throughout, it refrains from drawing conclusions beyond what can be empirically demonstrated. The result is an invaluable tool for future scholarship on popular cinema."

This 363-page compendium presents a comprehensive and detailed history of the large-scale, high-cost movie from the beginning of movie-making in the 1890s down to the present day. Chronologically organized, the impact of technological developments on movie making is fully integrated into this superbly written and scholarly history, making Epics, Spectacles, and Blockbusters an invaluable and core addition to personal, professional, academic, and community library Hollywood History & Film reference collections and supplemental reading lists."