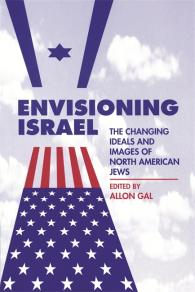 The Changing Ideals and Images of North American Jews

Envisioning Israel examines the deeply entwined yet often problematic historical relationship between American Jewry and the Jewish community in Israel and its predecessor, the yishuv, the Jewish settlement in Palestine from the 1880s until 1948.

To explore how North American Jews have envisioned Israel from the late 19th century through the present, Allon Gal initiated an international conference and has selected essays from it on the American Jewish community's political, religious, economic, and cultural responses to the formation and needs of modern Israel.

Written by leading scholars from various disciplines, the articles in this volume discuss the envisioning of Israel as it has evolved between two mythical parameters: Israel as the successful, stubborn nation that has survived tragedy; and Israel as holding out a unique promise of morality and justice
—of being a light unto the nations.

Allon Gal of Ben-Gurion University of the Negev, is the author of several important books and numerous articles. Of Israeli birth and education, he received his Joint Ph. D., With Distinction, from Brandeis University's programs of Jewish and American history, and has frequently visited the United States— especially its higher institutes of learning and its Jewish community. Professor Gal, a Senior Research Fellow of Ben-Gurion Research Center, also serves on the faculty of the History Department, and is the founder and director of the Center for American Jewry, BGU. He lives with his family in Beer Sheva.