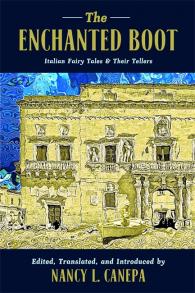 Italian Fairy Tales and Their Tellers

This comprehensive collection of Italian tales in English encourages a revisitation of the fairy-tale canon in light of some of the most fascinating material that has often been excluded from it. In the United States, we tend to associate fairy tales with children and are most familiar with the tales of the Brothers Grimm, Hans Christian Anderson, and Disney. But the first literary fairy tales appeared in Renaissance Italy, and long before the Grimms there was already a rich and sophisticated tradition that included hundreds of tales, including many of those today considered "classic." The authors featured in this volume have, over the centuries, explored and interrogated the intersections between elite and popular cultures and oral and literary narratives, just as they have investigated the ways in which fairy tales have been and continue to be rewritten as expressions of both collective identities and individual sensibilities. The fairy tale in its Italian incarnations provides a striking example of how this genre is a potent vehicle for expressing cultural aspirations and anxieties as well as for imagining different ways of narrating shared futures.

What a timely and marvelous volume this is! The Enchanted Boot traces a much-needed trajectory for the Italian fairy-tale tradition, mapping a long and distinctive history for this unruly genre that highlights how intertwined its fantastic flights and ironies are with harsh social realities as well as with the Italian peoples’ often conflicting regional and national sensibilities. Canepa’s breadth and insight as a scholar of literary fairy tales and Italian culture is matched by her genuine talent as a translator keenly tuned into the brio, moods, and multiple registers of the genre in Italy from the fourteenth century to the present. Finally, a collection in English that allows for Italian fairy tales to take their rightful place in the transnational history of the genre rather than playing cameo roles in it, and it is such a pleasure to read.

– Cristina Bacchilega, professor emerita, University of Hawai‘i at Manoa, and coeditor of Marvels & Tales: A Journal of Fairy-Tale Studies

Nancy Canepa has superbly translated and edited a complete collection of the most significant Italian tales from Roman times to the present. Her translations and choice of tales reveal the enchantment of Italian storytellers who deserve to be better known in the English-speaking world.

Nancy Canepa’s splendid selection of Italian fairy tales is a precious gift to all readers interested in this literary genre. Not only does this volume reveal the persistent beauty of the Italian tradition, it also offers a rigorous analysis of its historical and cultural evolution.

Thanks to The Enchanted Boot, English-speaking readers can now experience the Italian fairy tale’s unique role in shaping Europe’s literature of magic and wonder. Superb translations and expert commentary make Nancy Canepa’s collection of Italian tales from the Middle Ages to the twenty-first century a monumental contribution to fairy-tale studies.