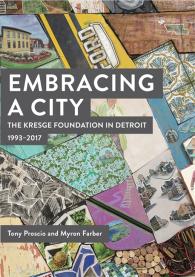 The book provides a behind-the-scenes look into the unlikely partnerships, unique collaborations, variety of financial tools and bold bets led by The Kresge Foundation during a 13-year period in Detroit to foster a sustainable and equitable recovery for the city and all of its residents. The authors originally imagined the book contents as four individual case studies. In preparation, they performed an exhaustive review of Kresge Foundation historical documents and a comprehensive scan of media coverage and journalistic commentary about Detroit’s recovery. They also conducted more than four dozen interviews with the individuals who participated in, witnessed or otherwise impacted the changing tide in the city of Detroit during this period. Once assembled, the authors agreed that—assembling together in context with one another – the content could serve as an important snapshot of some of the positive forces and extreme undercurrents at play in Detroit during this extraordinary time in the city.

Published by: The Kresge Foundation

Tony Proscio is associate director of the Center for Strategic Philanthropy and Civil Society at Duke University and a consultant to foundations and major nonprofit organizations on strategic planning and evaluation. He is co-author, with Paul S. Grogan, of Comeback Cities: A Blueprint for Neighborhood Revival (Westview Press 2000), and author of Becoming What We Can Be: Stories of Community Development in Washington, DC (LISC, 2012). A Detroit native, he has held executive positions in New York State and City government and in the 1990s was associate editor of The Miami Herald.

M. A. Farber is an award-winning former investigative reporter for The New York Times. From 2001 to 2014, he conducted oral histories for Columbia University on the 9/11 attack, capital punishment, the Guantanamo Bay prison camp and American philanthropy. Educated at the University of Maryland and Northwestern University, he has contributed to Vanity Fair and Smithsonian magazines and is the author of Somebody is Lying: The Story of Dr. X and co-author of Outrage: The Story Behind the Tawana Brawley Hoax.

Embracing a City is a must read for anyone who wants to believe that large scale change is possible. Yes, it can be viewed as a story about philanthropy but, more importantly, it's about the leadership, patience, risk taking, and humility that’s needed to be a catalyst for change, whoever you are.

The Kresge Foundation has exemplified the impact philanthropy can have on American cities, through transformational leadership, major investments and strategic partnerships. Embracing a City documents the remarkable work Kresge has accomplished in Detroit to drive the return of one of America's iconic cities.

The survival of Detroit hinged on a vision both audacious and sweeping—a vision which sprang from the mind of Rip Rapson. The Kresge Foundation emerged from the crisis years as the North Star among the constellation of regional foundations. We should chart our course by their bold dream for Detroit’s re-imagined future. Every city in America needs a Kresge—dreamers for whom no dream is too big; master conveners; audacious architects for the future who embrace risk when others flee it.

This chronicle of the Kresge Foundation’s proud quarter-century of dedication to improving Detroit demonstrates that ambitious planning, partnerships and perseverance are key to restoring hope for urban America. The Foundation’s focus on creating connections, community, and opportunity stands as both a blueprint and an inspiration. For all of Detroit’s challenges, the city may be among the most fortunate in having an anchor institution—the Kresge Foundation—that takes an ‘all-in’ approach.

The Kresge Foundation's unwavering commitment to Detroit has had an extraordinary impact on the community’s twenty-first-century renewal. As chronicled in Tony Proscio’s and Myron A. Farber’s Embracing a City, the Kresge Foundation—under the visionary leadership of Rip Rapson—has served as a force for transformation in nearly every aspect of the city’s and region’s renaissance and reinvention. An indispensable testimony of the recent past, this important monograph—and the story it tells—will undoubtedly leave you more assured of Detroit’s bright and promising future.

20 hours 52 min ago
More on the book here: https://t.co/4k5CJhQV6r
20 hours 53 min ago
🎵TAKE MY BREATH AWAY🎵 Thank you for this great piece, @juliehinds and @freep! Do not miss the virtual book launch… https://t.co/dY6hYjGOlt
20 hours 55 min ago
RT @j_o_rawlins: This Thursday I'll be joining Sean Redmond, @glendud, @VampireSorcha, Alex Wade, and Brenda Weber on zoom to talk T… https://t.co/6Rk4aRhwtX