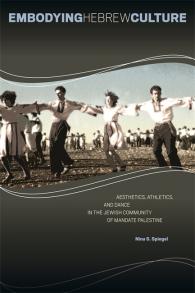 Aesthetics, Athletics, and Dance in the Jewish Community of Mandate Palestine

From their conquest of Palestine in 1917 during World War I, until the establishment of the State of Israel in 1948, the British controlled the territory by mandate, representing a distinct cultural period in Middle Eastern history. In Embodying Hebrew Culture: Aesthetics, Athletics, and Dance in the Jewish Community of Mandate Palestine, author Nina S. Spiegel argues that the Jewish community of this era created enduring social, political, religious, and cultural forms through public events, such as festivals, performances, and celebrations. She finds that the physical character of this national public culture represents one of the key innovations of Zionism-embedding the importance of the corporeal into national Jewish life-and remains a significant feature of contemporary Israeli culture.

Spiegel analyzes four significant events in this period that have either been unexplored or underexplored: the beauty competitions for Queen Esther in conjunction with the Purim carnivals in Tel Aviv from 1926 to 1929, the first Maccabiah Games or "Jewish Olympics" in Tel Aviv in 1932, the National Dance Competition for theatrical dance in Tel Aviv in 1937, and the Dalia Folk Dance Festivals at Kibbutz Dalia in 1944 and 1947. Drawing on a vast assortment of archives throughout Israel, Spiegel uses an array of untapped primary sources, from written documents to visual and oral materials, including films, photographs, posters, and interviews. Methodologically, Spiegel offers an original approach, integrating the fields of Israel studies, modern Jewish history, cultural history, gender studies, performance studies, dance theory and history, and sports studies.

In this detailed, multi-disciplinary volume, Spiegel demonstrates the ways that political and social issues can influence a new society and provides a dynamic framework for interpreting present-day Israeli culture. Students and teachers of Israel studies, performance studies, and Jewish cultural history will appreciate Embodying Hebrew Culture.

Nina S. Spiegel is the Rabbi Joshua Stampfer Assistant Professor of Israel Studies at Portland State University. She holds a PhD in history from Stanford University, and her articles have appeared in publications such as Jewish Cultural Studies, Jewish Folklore and Ethnology Review, and Rethinking History: The Journal of Theory and Practice. She has also served on the board of directors of the Congress on Research in Dance.

Through the prism of beauty, dance, and the first Maccabiah, core ideological struggles are revealed for the emergent cultural themes in Mandatory Palestine and continuing in Israeli society. Anchored in interdisciplinary perspectives, Dr. Spiegel weaves together an original, fascinating, and insightful story of the social and cultural life of the Yishuv.

This is a book that I have wanted to read for a long time. Nina Spiegel demonstrates how British-Mandate Palestine constructed a public culture premised on corporeality and how new forms of folk dance, theatrical dance, sport, and festival embodied the tensions and debates of an emerging nation-one poised between past and present, East and West, sorrow and celebration. Embodying Hebrew Culture enriches and amplifies our understanding of performance and politics in twentieth-century culture.

[This] book offers a significant contribution to the understanding of the richness and diversity of perfonnative culture in Mandatory Palestine. [It] shed[s] light on the interconnections and interactions within the field of the performing arts, along with its social, cultural, and aesthetic aspects.

By focusing on three of the major cultural innovations of early Zionism-beauty contests, sports, and dance-Nina S. Spiegel provides a clear, concise, and comprehensive guide to that fascinating period of ferment and ingenuity: the attempt to rejuvenate Jewish culture according to the tenets of European nationalism and resurrect it anew in the Land of Israel in the first half of the twentieth century.

4 hours 57 min ago
Happy Pub Date! HOUSE AND HOME is a collection of poems that intensely explore the beauty & wisdom to be found in w… https://t.co/MYnkKJxcrx
2 days 7 hours ago
Join WSU President M. Roy Wilson for a book talk next Wednesday! Copies of his memoir will be available for sale a… https://t.co/6q5w5dtFtu
4 days 7 hours ago
TONIGHT! Join @stephanie_heit at @ShopBooksweet for local author's night! https://t.co/pTny5OErDe