Home » Books » From the Elephant's Back 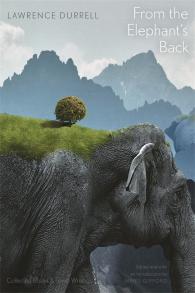 From the Elephant's Back

Lawrence Durrell
Edited and with an Introduction by James Gifford
Peter Baldwin, Foreword

"This collection has a straightforward ambition: to redirect the interpretive perspective that readers bring to Lawrence Durrell’s literary works by returning their attention to his short prose." – From the Introduction

Best known for his novels and travel writing, Lawrence Durrell defied easy classification within twentieth-century modernism. His anti-authoritarian tendencies put him at odds with many contemporaries—aesthetically and politically. However, thanks to a compelling recontextualization by editor James Gifford, these 38 previously unpublished or out-of-print essays and letters reveal that Durrell’s maturation as an artist was rich, complex, and subtle. This edition promises to open up new approaches to interpreting his more famous works. Durrell fans will treasure this selection of rare nonfiction, while scholars of Durrell, Modernist literature, anti-authoritarian artists, and the Personalist movement will also appreciate Gifford’s fine editorial work.

Lawrence Durrell (1912–1990) was a critically hailed novelist, poet, and travel writer born in Jalandhar, British India, and best known for the Alexandria Quartet novels, which were ranked by the Modern Library as among the greatest works of English literature in the twentieth century.

James Gifford is associate professor of English and the Director of the University Core Curriculum at Fairleigh Dickinson University in Vancouver. He has published several scholarly works on Lawrence Durrell. His latest publication is Personal Modernisms (2014).

[T]he interest of this volume does not only lie in the immeasurable wealth of Durrellian archives that are brought to the reader’s knowledge: it also sketches out the fascinating portrait of an artist engaged in the creative production of his generation so that readers of Shakespeare, Wordsworth, T. S. Eliot, Dylan Thomas, Richard Aldington, Cavafy, and Seferis will discover fascinating pieces of critical analysis where they may least have expected to.... The final part devoted to travel writing will similarly edify and stimulate both Durrell’s readers and all those who seek to understand the refinements of the genre.