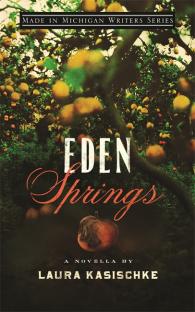 A novella by Laura Kasischke

Kasischke brings the past to life in a series of vividly sensuous vignettes, stitching them together like the panels of a quilt and gradually revealing a mysterious and subtle pattern.

In 1903, a preacher named Benjamin Purnell and five followers founded a colony called the House of David in Benton Harbor, Michigan, where they prepared for eternal life by creating a heaven on earth. Housed in rambling mansions and surrounded by lush orchards and vineyards, the colony added a thousand followers to its fold within a few years, along with a zoo, extensive gardens, and an amusement park. The sprawling complex, called Eden Springs, was a major tourist attraction of the Midwest. The colonists, who were drawn from far and wide by the magnetic "King Ben," were told to keep their bodies pure by not cutting their hair, eating meat, or engaging in sexual relations. Yet accounts of life within the colony do not reflect such an austere atmosphere, as the handsome, charming founder is described as loving music, dancing, a good joke, and in particular, the company of his attractive female followers.

In Eden Springs, award-winning Michigan author Laura Kasischke imagines life inside the House of David, in chapters framed by real newspaper clippings, legal documents, and accounts of former colonists. Told from the perspective of the young women who were closest to Benjamin Purnell, the novella follows a growing scandal within the colony’s walls. A gravedigger has seen something suspicious in a recently buried casket, a loyal assistant to Benjamin is plotting a cover-up, talk is swirling about unmarried girls having babies, and a rebellious girl named Lena is ready to tell the truth. In flashbacks and first-person narrative mixed with historical artifacts, Kasischke leads readers through the unraveling mystery in a lyrical patchwork as enticing and satisfying as the story itself.

Eden Springs lets readers inside the enchanting and eerie House of David, with an intimate look at its hedonistic highs and eventual collapse. This novella will appeal to all readers of fiction, as well as those with an interest in Michigan history.

Laura Kasischke is the author of seven collections of poetry, two novels for young adults, and five novels, including, most recently, In a Perfect World. She was the 2009 recipient of a Guggenheim Fellowship for poetry.

Eden Springs is a remarkable re-imagining of a fascinating and little-known historical episode. Kasischke brings the past to life in a series of vividly sensuous vignettes, stitching them together like the panels of a quilt and gradually revealing a mysterious and subtle pattern."

Laura Kasischke is a brilliant guide to the bestiary of human desires and agitations. She shows us the men, women, and girls of the House of David compound and creates a compelling vision behind the white suits and fluttering dresses of this fruit-picking, ticket-taking community of believers. I'm in love with the buoyancy and energy of the story, practically blinded by all that white and fluttering trouble."

Kasischke adds interesting history through photographs and excerpts from books and newspapers of the era; and her writing moves from dreamlike to decidedly real, her trademark skill much in evidence here. Historians and those who appreciate fine writing will fine much to enjoy."

A beautifully polished, evocative tale by poet, novelist, and Guggenheim fellow Kasischke (In a Perfect World) pursues an early 20th-century utopian community in Benton Harbor, Mich., and its eventual derailment. Kasischke explores the sensuous message of this paradisiacal cult, depicting gorgeously a web of irresistible impressions taken as God's truth.

The promise of eternal life is of course tantalizing. Combine this with assurances of youthful beauty and you have a fairly intoxicating attraction. It is just this alchemy that rests at the heart of Laura Kasischke's new novella Eden Springs. Taken from true accounts of the House of David religious cult near Benton Harbor in the early part of 20th century, Kasischke's fictionalized version is a cautionary tale. In the end, Eden Springs shows how promises of forever can disappear under the pressures of the present."

Built like a collage-photos, legal documents, court testimony, and news clippings sit aside fictional vignettes-Eden Springs manages to evoke both suspense and prophecy." ?

Told through the eyes of the women surrounding Purnell, the tone is almost dreamy, and completely enchanting, while the inclusions of various postcard photographs solidifies the story as a slice of Michigan history."

5 hours 34 min ago
HAPPY PUB DATE! Dan Gerber said "If you make yourself available to Cindy Hunter Morgan’s poems, they will revivif… https://t.co/L60dTqsUUj
1 day 1 hour ago
Grab your copy or e-book of @fkwang's YOU CANNOT RESIST ME WHEN MY HAIR IS IN BRAIDS today! https://t.co/htFDjNa9yj https://t.co/zHyt049441
4 days 3 hours ago
Wayne State University Press is proud to announce our winner and finalists of the 2022 Next Generation Indie Book A… https://t.co/Ozy1WEQY1i