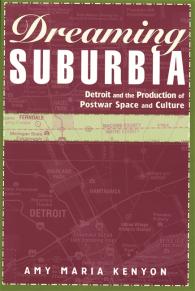 Detroit and the Production of Postwar Space and Culture

Dreaming Suburbia effectively presents some of the major themes in the way that post-war American suburbs have been represented.

Dreaming Suburbia is a cultural and historical interpretation of the political economy of postwar American suburbanization. Questions of race, class, and gender are explored through novels, film, television and social criticism where suburbia features as a central theme. Although suburbanization had important implications for cities and for the geo-politics of race, critical considerations of race and urban culture often receive insufficient attention in cultural studies of suburbia. This book puts these questions back in the frame by focusing on Detroit, Dearborn and Ford history, and the local suburbs of Inkster and Garden City. Covering such topics as the political and cultural economy of suburban sprawl, the interdependence of city and suburb, and local acts of violence and crises during the 1967 riots, the text examines the making of a physical place, its cultural effects and social exclusions. The perspectives of cultural history, American studies, social science, and urban studies give Dreaming Suburbia an interdisciplinary appeal.

Amy Maria Kenyon spent her childhood in suburban Detroit. Formerly a lecturer in cultural history, she is now a freelance author and researcher working in both the United Kingdom and the Netherlands.

The framework device is ingenious and Kenyon makes some significant points. Her complex insight that the early post-war American suburb turned its back not only on the inner city and upon Blacks but also upon the past carries the ring of truth and it gains resonance from her suggestion that suburbia became central to a national identity. Then, too, her use of the term detachment, in place of segregation or separation, adds meaning: it conveys the irony not only of retrospective accounts such as her own, but also of contemporaries, including those who experienced suburban estrangement. Dreaming Suburbia effectively presents some of the major themes in the way that post-war American suburbs have been represented.

Dreaming Suburbia is always interesting. It deepens our understanding of the challenges endured by those left behind in the postwar cities while revealing the conformity that enveloped those who opted to leave. The suburbs carried the weight of postwar prosperity and national identity, burdens that the book amply documents."

Kenyon's most valuable contribution is the insertion of cultural history into what has been primarily a structural analysis of urban decline. [Dreaming Suburbia's] strength lies in Kenyon's careful reading of films, novels, and television shows that produced and reflected multiple narratives of postwar suburbanization. Urban historians interested in writing a fuller history of postwar American would do well to be more attentive to these cultural manifestations of suburban life."