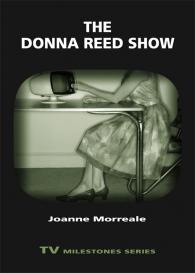 Explores, comprehensively and precisely, what this often neglected but revealing show tells us about its genre and its era. This is the sort of book the TV Milestones series was designed to cover.

At a time when television offered limited opportunities for women, Donna Reed was an Oscar-winning Hollywood actress who became both producer (though largely uncredited) and star of her own television show. Distinct from the patriarchal family sitcoms of the era, The Donna Reed Show's storylines focused on the mother instead of the father, and its production brought a cinematic aesthetic to television situation comedy. In The Donna Reed Show, author Joanne Morreale illustrates how the program pushed the boundaries of the domestic sitcom at a time when the genre was evolving and also reflected the subtle shifts and undercurrents of unrest in the larger social and political culture.

Morreale begins by locating Donna Reed in relation to her predecessors Gertrude Berg and Lucille Ball, both of whom were strong female presences in front of and behind the camera. She also explores the telefilm aesthetics of The Donna Reed Show and argues that the series is a prime example of the emergent synergy between Hollywood and the television industry in the late fifties. In addition, Morreale argues that the Donna Stone character's femininity acts as a kind of masquerade, as well as provides a proto-feminist model for housewives. She also examines the show's representation of teen culture and its role in launching the singing careers of its two teenaged stars. Finally, Morreale considers the legacy of The Donna Reed Show in the representation of its values in later sitcoms and its dialogue with contemporary television texts.

Morreale illustrates the interplay of gender, industry, and culture at work in the history of this classic TV series. Fans of the show, as well as students and teachers of television history, will enjoy this close look at The Donna Reed Show.

Joanne Morreale is associate professor of media and screen studies at Northeastern University.

Joanne Morreale illustrates that The Donna Reed Show was far from the average 1950s sitcom and Reed was far more than the stereotypical happy housewife. In fact, Reed and her show are revealed to be at the forefront of the dynamic transformations taking place in the TV industry, the sitcom form, teen culture, and gender roles during the 1950s and 1960s.

– Alisa Perren, associate professor in the Department of Communication at Georgia State University

– Mary Beth Haralovich, professor in the School of Theatre, Film & Television at the University of Arizona

Morreale's volume deepened my knowledge and appreciation of the series. The biographical information about Reed enriches her analysis and the sections dealing with melodrama bring forward a less examined dimension of the genre.

When Nick at Nite brought The Donna Reed Show back into our living rooms, a TV spot promised to reveal for the first time the classic 1960s domestic sitcom's subliminal messages. We learn, for example, that one episode contained the secret message 'Marry a Doctor.' In her revealing and welcome study of The Donna Reed Show, preeminent sitcom scholar Joanne Morreale never delves into its subliminal secrets, but she does explore, comprehensively and precisely, what this often neglected but revealing show tells us about its genre and its era. This is the sort of book the TV Milestones series was designed to cover.

1 week 3 days ago
Wayne State University Press is excited to announce the redesign of our TV Milestones Series! For more info on the… https://t.co/t5iKM1qXje
2 weeks 3 days ago
Hey @waynestate Warriors! Don't forget to show your One Card and save 30% off your order at @WSUPress! Details a… https://t.co/dVkj0eylOc
1 month 4 days ago
RT @waynestatealum: Joseph Harris (@PrinceLanzen) is a 2013 @WayneStateCLAS alum. His debut book, You’re in the Wrong Place, was publis… https://t.co/tPMo8Hs5vi