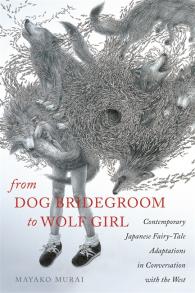 From Dog Bridegroom to Wolf Girl

Contemporary Japanese Fairy-Tale Adaptations in Conversation with the West

As in the United States, fairy-tale characters, motifs, and patterns (many from the Western canon) have pervaded recent Japanese culture. Like their Western counterparts, these contemporary adaptations tend to have a more female-oriented perspective than traditional tales and feature female characters with independent spirits.In From Dog Bridegroom to Wolf Girl: Contemporary Japanese Fairy-Tale Adaptations in Conversation with the West, Mayako Murai examines the uses of fairy tales in the works of Japanese women writers and artists since the 1990s in the light of Euro-American feminist fairy-tale re-creation and scholarship.

After giving a sketch of the history of the reception of European fairy tales in Japan since the late nineteenth century, Murai outlines the development of fairy-tale retellings and criticism in Japan since the 1970s. Chapters that follow examine the uses of fairy-tale intertexts in the works of four contemporary writers and artists that resist and disrupt the dominant fairy-tale discourses in both Japan and the West. Murai considers Tawada Yoko’s reworking of the animal bride and bridegroom tale, Ogawa Yoko’s feminist treatment of the Bluebeard story, Yanagi Miwa’s visual restaging of familiar fairy-tale scenes, and Konoike Tomoko’s visual representations of the motif of the girl’s encounter with the wolf in the woods in different media and contexts. Forty illustrations round out Murai’s criticism, showing how fairy tales have helped artists reconfigure oppositions between male and female, human and animal, and culture and nature.

From Dog Bridegroom to Wolf Girl invites readers to trace the threads of the fairy-tale web with eyes that are both transcultural and culturally sensitive in order to unravel the intricate ways in which different traditions intersect and clash in today’s globalising world. Fairy-tale scholars and readers interested in issues of literary and artistic adaptation will enjoy this volume.

Mayako Murai is a professor in the English department at Kanagawa University, Japan. Her recent writings have appeared in Grimms’ Tales around the Globe: The Dynamics of Their International Reception (Wayne State University Press, 2014) and the journal Marvels & Tales.

From Dog Bridegroom to Wolf Girl is an important and delightful addition to the growing field of fairy-tale studies. Informed by Japanese and European literary, cultural, and feminist theory, Murai offers a series of nuanced readings of fascinating fairy-tale adaptations by four contemporary Japanese women artists and writers.

– Tomoko Aoyama, associate professor and reader in Japanese, the University of Queensland, author of Reading Food in Modern Japanese Literature and co-editor of Girl Reading Girl in Japan and Configurations of Family in Contemporary Japan

An essential for any class on literary folklore genres, this book would also be of interest to gender and women’s studies, contemporary and comparative literature, and contemporary art criticism and art history.

An excellent resource for those interested in Japanese and comparative literature, visual arts, fairy-tale studies, cultural studies, and gender and sexuality studies.

Murai’s detailed examinations not only enlarge the English-language discussion of these important authors and artists, but provide a space for further fairy-tale research that is 'both transcultural and culturally sensitive.'

[From Dog Bridegroom to Wolf Girl] show[s] English-speaking scholars how deeply folklore has influenced Japanese culture at both the popular and fine art levels and provide useful academic tools for unpacking this wealth of meaning.

From Dog Bridegroom to Wolf Girl makes ample use of illustrations and samples of the chosen artists’ work in order to lend depth and clarity to its analysis—a sensible move given that a Western readership is likely to be unfamiliar with the majority of the artworks depicted. However, the author does occasionally lapse into description rather than analysis when examining her chosen cultural products. This is arguably quite necessary with the stories she scrutinizes, and lends some context to them. It is less necessary with some of the artwork, but Murai’s interpretations of the works are always interesting and well thought out. Despite its short length and its acknowledged limitations, this is an interesting and informative work.

It is tantalising indeed to imagine what such transcultural collaborative conversations might look like when fairy-tale criticism and art further their ecocritical explorations and join forces with the most exciting work currently being done in the environmental humanities,
from material ecofeminism to multispecies ethnography. Mayako Murai’s From dog bridegroom to wolf girl is a major contribution in this direction.