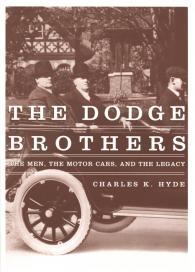 The Men, the Motor Cars, and the Legacy

Hyde leaves no stone unturned in his chronicle of two of the industry's most important pioneers. Thoroughly researched, the focus is squarely on the men, their contributions, and the legacy they have given to the auto world.

At the start of the Ford Motor Company in 1903, the Dodge Brothers supplied nearly every car part needed by the up-and-coming auto giant. After fifteen years of operating a successful automotive supplier company, much to Ford’s advantage, John and Horace Dodge again changed the face of the automotive market in 1914 by introducing their own car. The Dodge Brothers automobile carried on their names even after their untimely deaths in 1920, with the company then remaining in the hands of their widows until its sale in 1925 to New York bankers and subsequent purchase in 1928 by Walter Chrysler. The Dodge nameplate has endured, but despite their achievements and their critical role in the early success of Henry Ford, John and Horace Dodge are usually overlooked in histories of the early automotive industry.

Charles K. Hyde’s book The Dodge Brothers: The Men, the Motor Cars, and the Legacy is the first scholarly study of the Dodge brothers and their company, chronicling their lives—from their childhood in Niles, Michigan, to their long years of learning the machinist’s trade in Battle Creek, Port Huron, Detroit, and Windsor, Ontario—and examining their influence on automotive manufacturing and marketing trends in the early part of the twentieth century. Hyde details the brothers’ civic contributions to Detroit, their hiring of minorities and women, and their often anonymous charitable contributions to local organizations. Hyde puts the Dodge brothers’ lives and accomplishments in perspective by indicating their long-term influence, which has continued long after their deaths.

The most complete and accurate resource on John and Horace Dodge available, The Dodge Brothers uses sources that have never before been examined. Its scholarly approach and personal tone make this book appealing for automotive historians as well as car enthusiasts and those interested in Detroit’s early development.

Charles K. Hyde is professor of history at Wayne State University. He has authored many books, most recently Riding the Roller Coaster: A History of the Chrysler Corporation (Wayne State University Press, 2003), which was selected as a 2004 Notable Book by the Library of Michigan.

The critical importance of John and Horace Dodge, from their childhood in Niles to their company's merger with the Chrysler Corporation in 1928, is illustrated in this well-researched automotive history."

Written by Professor Charles K. Hyde, who last year brought us the acclaimed history of Chrysler, Riding the Roller Coaster. Hyde leaves no stone unturned in his chronicle of two of the industry's most important pioneers. Thoroughly researched, the focus is squarely on the men, their contributions, and the legacy they have given to the auto world.

Charles Hyde has written a scholarly but very accessible account of the personal histories, manufacturing operations, and legacy of John and Horace Dodge. The book is carefully documented and contains useful endnotes and numerous illustrations including cartoons, product advertisements, and photos of factories, cars, yachts, and mansions. Charles Hyde concludes this informative work with thoughtful remarks on the previously overlooked legacy of the Dodge brothers, their company, and their motor cars."

2 days 47 min ago
Now a National Jewish Book Award Finalist! @JewishBook https://t.co/qTKAeUEPVX
2 days 4 hours ago
RT @Steph_Steinberg: Tomorrow @ 7 p.m.! Join me and @DETWritingRoom at The Whitney for our first #2023AuthorSeries event ft. @waynestate… https://t.co/pssbi2NLNs
6 days 5 hours ago
SAVE THE DATE! Join author Desiree Cooper and illustrator Bec Sloane this Saturday for a behind the scenes look at… https://t.co/cKDBmbewOa